Last week, Autodesk released the first Pre-release trial of Smoke 2013 – containing a major redesign of industry-stalwart Smoke. With this trial, Autodesk has targeted the fall for the release of the finished version.

During the last few weeks, I’ve had the privilege of playing with the software and was invited by Autodesk to create introductory video training for the program. (More on that in a bit.)

This article is a first look at the program, with suggestions on how to get started exploring the free trial.

WHAT IS AUTODESK SMOKE?

Autodesk has been a leader in 3D and entertainment software for decades. Their product lines include Smoke, 3ds Max, Maya, Flame, Mudbox, SoftImage, and about a billion others.

Smoke has been an industry-leading finishing tool (think effects and color correction) for more than 20 years. Smoke 2013 is the latest version of their all-in-one video editing and finishing tool that was redesigned to improve its editing capability and make it more accessible to Final Cut, Premiere, and Avid editors looking to put more power and finesse into their editing.

The big news with this release is the new timeline interface, which puts a track-based editing timeline on the front-end and connects it to a node-based compositing powerhouse for effects and finishing.

Final Cut is a powerful editing tool, but it’s built-in effects are limited, especially when compared to Motion, After Effects, Smoke, or any high-end compositing program. So, traditionally, we would purchase the base software – Final Cut – then add plugins until it had the features we wanted.

Smoke takes a different approach to editing. It provides world-class compositing tools all unified in a single package. Rather than spend time and money acquiring plug-ins, everything you need is all in one place.

“All-in-one” is a very bold statement, which Smoke has successfully lived up to for very demanding high-end clients for many, many years.

The list is long and you can learn more here: www.autodesk.com/smoke

But, golly!, the software was hard to learn, expensive, intimidating, and the province of highly-trained effects wizards.

What makes Smoke 2013 so exciting is that Autodesk has totally changed the editing front-end by adding a track-based Timeline, emulated the keyboard shortcuts of Final Cut Pro 7, and lowered the price to $3,495. They want to make their software far more accessible to the industry.

NOTE: When I asked Autodesk about the price, they said that if you compare the cost of Smoke to a typical Final Cut edit system, by the time you add in the costs of plug-ins and other supporting software to Final Cut, the prices are comparable.

From now till its formal release in September, Smoke is providing a free trial of the new version.

If you’ve ever been curious to see what it’s like to run software used by all the major post houses, this is a great time to experiment. Plus, Autodesk is extremely interested in your comments on what they can do to make the software better and easier to use.

Getting involved now, with the trial, offers zero risk with the ability to influence the future development of the product.

One of the biggest – but most hidden – decisions you need to make happens during installation. After you download the software and begin installing, it asks where you want to install the Autodesk Media Folder.

I wasn’t paying attention and installed it on my boot disk.

This is absolutely the wrong thing to do. The Autodesk Media Folder needs to be on a second drive. This is Smoke’s version of scratch disks. Smoke does its magic using a series of databases, in addition to media files. The organization and performance of those database is determined by the location of the Autodesk Media Folder.

The performance of the entire system hinges on getting the location of this folder correct – and it is difficult to move once you’ve installed it.

NOTE: For experienced Smoke users, the Pre-Release Trial does not require a license – so past issues with license management are not an issue with this installation.

Once installation is complete, drag the Smoke icon from the Application folder to the Dock, and start the program. 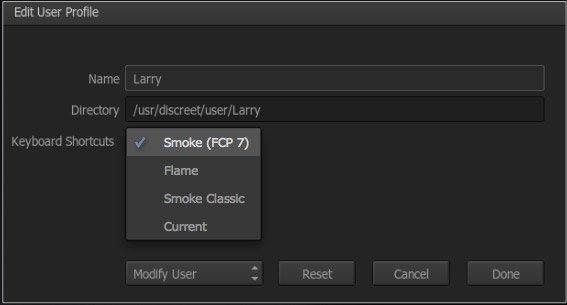 The first thing you need to do is create a new user. Smoke allows an unlimited number of users per system and, just as you log into your computer, you also need to log into Smoke.

What you are doing here is providing a user name and selecting the keyboard shortcuts you want to use. Smoke supports shortcuts from Final Cut Pro 7, earlier versions of Smoke, and Flame.

You need to do this once for every user. To improve efficiency, Smoke remembers the name of the last user of the program. So, if you are the only one using Smoke, you can safely ignore this, once Smoke is setup. 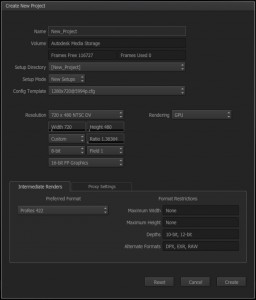 Then, you need to create a new Project. Just as with Final Cut – which served as the role model for Smoke’s Timeline editing – you need to specify project settings. (Click the image to see a larger view.)

As usual, give the project a name – I used “New Project” here – then select the project image size. Smoke can work with all different formats and image sizes, but transcodes them to match the settings you establish here. You can override these when you create a new sequence, so think of the project settings as the default for all future sequences.

See the Intermediate Renders setting at the bottom? This determines the format for any transcoding or rendering that needs to be done. In the past, Smoke only worked with uncompressed DPX frames – it is a frame editor, at heart, not a clip editor. Now, Smoke also supports all flavors of ProRes.

It defaults to ProRes HQ. For most projects, changing this to ProRes 422 will be fine and reduce storage requirements.

To open your project, make sure you’ve selected your User Name, select the Project you want to open and click Start. 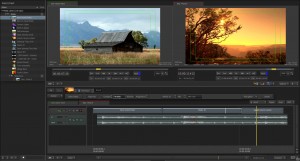 While Smoke allows you to create new sequences and edit directly in Smoke – and I show how to do this in my training – it is often faster to do the rough cut in Final Cut, then export the project from FCP to Smoke.

We do this by exporting an XML file from FCP. (XML is also used when exporting from FCP X, AAF is used for exporting from Premiere or Avid. Smoke easily imports from all four programs.) 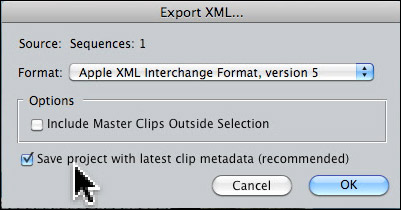 Open your project in Final Cut Pro, go to the Browser, and select the sequence you want to export for Smoke. Smoke only supports importing one sequence at a time. (There is no limit to the number of clips associated with that sequence.)

Choose File > Export > XML and set the XML to Level 5, uncheck the top box, and check the bottom box.

Open Smoke, select the project you want to open, verify the user name is correct, and click Start.

The easiest way to import a file is to select File > Import from the top menu (shortcut: Command+I).

This opens the MediaHub, which is used for importing and exporting media. In the column of hard disks and folders on the left – called the Media Library – navigate to where you stored the XML file.

Here, for instance, are two XML files – one from FCP 7 and the other from FCP X. Click the name of the file at the bottom of the icon to select the file.

Then, before clicking “Import,” go to the General tab at the bottom.

If Create Project Media is on, Smoke will transcode your media into the Intermediate Renders format you specified in Project settings and store it in the Autodesk Media Folder. This standardizes your media and improves performance, but increases storage requirements. (A button is on if it shows a pale blue light.)

If Create Project Media is off, Smoke links to your media and edits it natively. This is faster, with smaller storage requirements, but does not provide optimum performance. 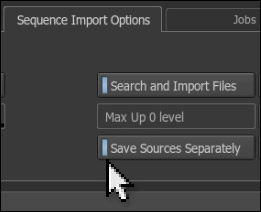 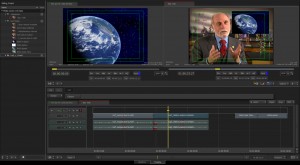 Smoke uses a single-monitor interface. This means that the bigger your monitor, the better. Smoke prefers a 1920 x 1080 display. (Click image for larger view.) Unlike FCP or Premiere, you can’t drag interface elements around. What you see is what you have to work with. The interface is composed of buttons and right-click menus.

NOTE: The secret to Smoke is that everything is a contextual menu. You right-click to access menu options. Menu options change depending upon the position of the cursor.

There are three main sections to the interface:

The yellow vertical bar in the Timeline is the playhead. You move it by:

Move the playhead between clips on the Timeline using the Up/Down arrow keys. Grab clips and drag to move them around. The Timeline behaves much as you would expect from Final Cut Pro.

Smoke is a very deep program. And absolutely worth spending time learning – especially now, during the free trial. However, I STRONGLY recommend that you get some training on the program before you start playing – it will save you a ton of time and aggravation. It emulates Final Cut, but it isn’t Final Cut – training will decrease confusion.

In conjunction with Autodesk, I’ve created six “Getting Started with Smoke” video tutorials that cover:

And I’ve created a download bundle, available in my store.

Smoke 2013 redefines the high-end of post-production in both cost and functionality. The program is not intuitive, but it is much more accessible than it has ever been.

Autodesk is committed to making this a program that can be used by regular editors, not just highly-trained visual effects superstars. And they need your opinion.

Watch the training, download the free trial, and let them know what you think. There is some very cool stuff here.