KeyFlow Pro, from Malgn Technology, is a media management and workflow tool that is optimized for Apple Final Cut Pro X. It can be used by a single editor or, through an in-app purchase, can expand to support small workgroups of up to twenty-two editors. It supports five users by default.

Last week, Malgn released the newest version – 1.8 – with some significant new features. In fact, since it first launched in July, 2015, its developers have aggressively added new features to the application.

This article provides a “first look” at the software and its new capabilities.

KeyFlow Pro is a powerful, flexible and full-featured media management tool that is designed to enable editors to track, annotate and share media and metadata. While a single editor can effectively use KeyFlow Pro to organize their media, its true power is realized when a small workgroup uses it for ingesting, tagging, and organizing media. By default, the software supports five users connecting to media stored on a server, though additional user packs are available through inexpensive in-app purchases.

It has a robust feature set, tight integration with Apple Final Cut Pro X, and is actively updated by its development team. Its support for small workgroups is especially clever. The program has a deep set of features, which is often hampered by hard to understand or poorly written instructions in the User Guide and website.

A 30-day free trial is available. 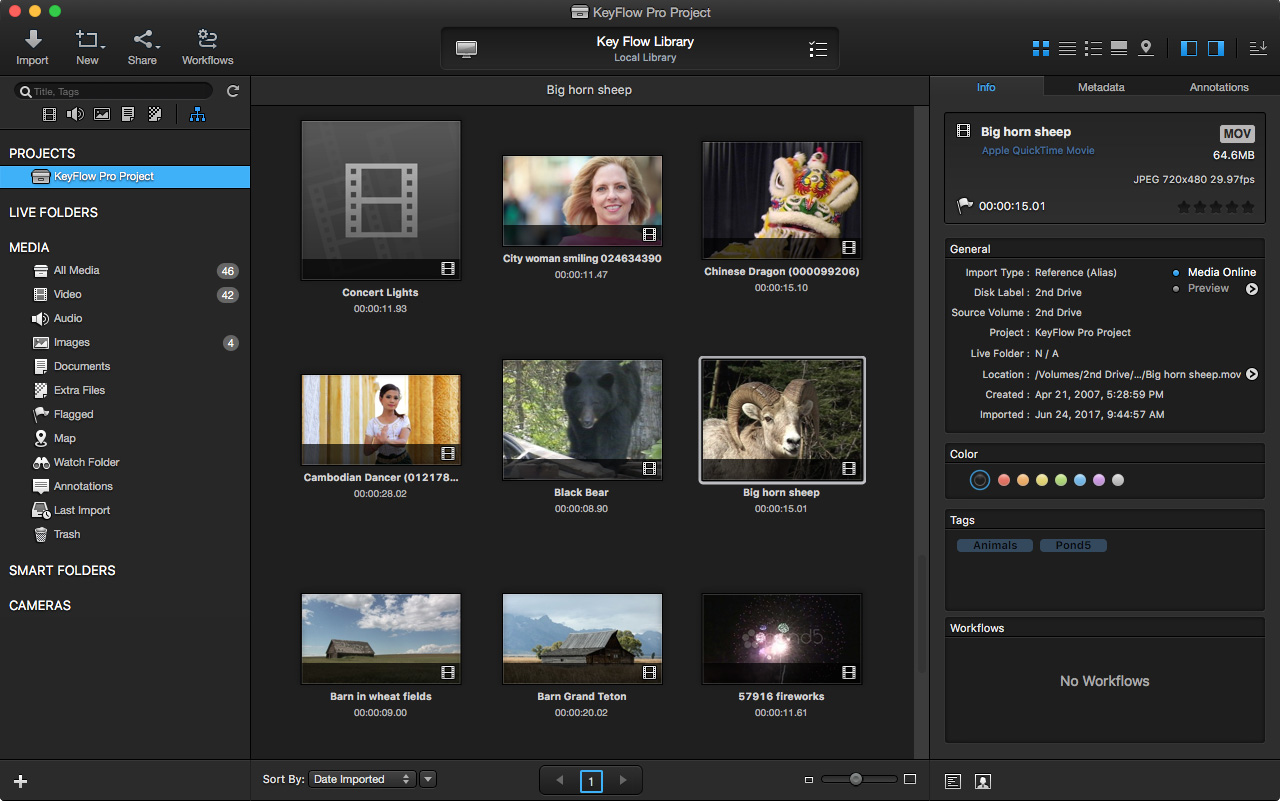 When first starting KeyFlow Pro, you are asked to create a Library. KeyFlow Pro libraries can be shared between editors, providing the media is stored on a server. By default, the initial installation of KeyFlow Pro supports 5 concurrent editors.

A Project in KeyFlow Pro is a collection of media; again, it need not match any projects that have been created in FCP X. 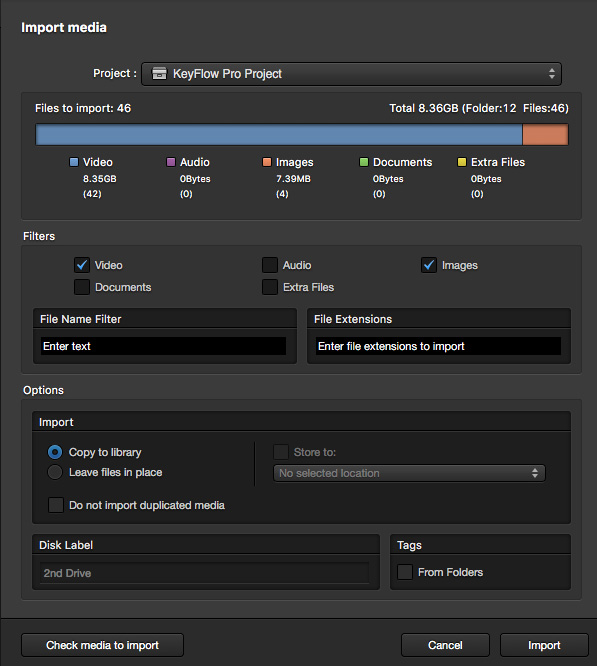 The reason to import media into KeyFlow Pro is to allow review, tagging and approval to be done outside of Final Cut. This allows an assistant editor to process media while an editor is editing.

Moving files between KeyFlow Pro and Final Cut is as easy as dragging and dropping; this is one of the key new features and works smoothly. Best of all, all metadata tags, such as markers, favorites and keywords travel with the files that are dragged and dropped. 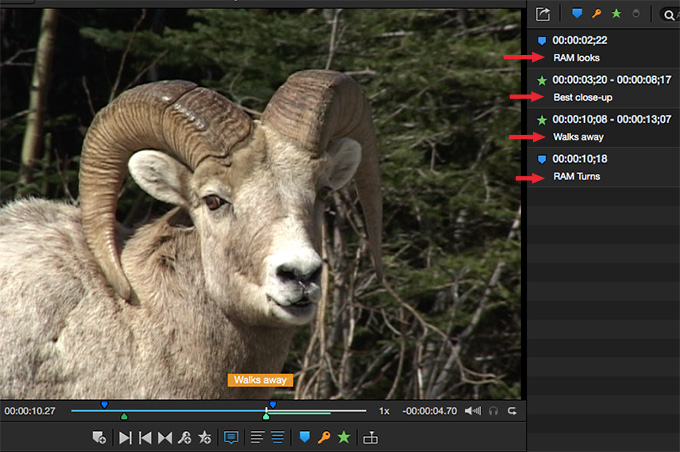 A new feature that I like a lot is the ability to select a range within a clip, mark it as a Favorite, then name the region. For example, here, I added two markers flagging good closeups, as well as two Favorite ranges that I could rename. This ability to not just flag, but name, selected regions is very powerful. 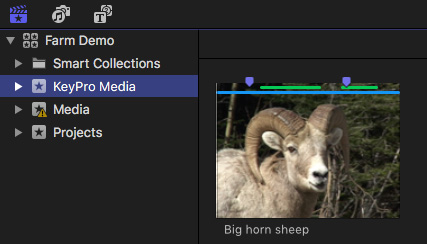 As you can see here in Final Cut Pro X, the clip that was dragged in from KeyFlow Pro retained all markers, marker names and favorited ranges. (If I had added them, this would also retain all keywords, which I’ll talk about in a minute.) 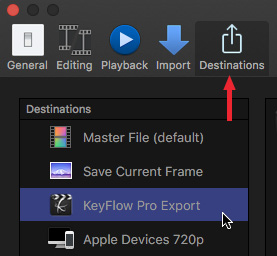 Another of the big new features is “Live Folders.” These provide a direct connection between KeyFlow Pro and the Finder. When you make changes to the contents of a folder in the Finder, those changes are reflected immediately in KeyFlow Pro.

Again, imagine you are part of a workgroup, where an assistant editor is ingesting media, logging it and organizing it into appropriate folders. Now, another editor will see new media the instant it is transferred to a Live Folder in the Finder, without having to exit KeyFlow Pro. At this point, the editor simply drags it into FCP X to start using the clips.

Another headline feature, which I’ve already mentioned, is the ability to drag files between KeyFlow Pro and Final Cut and have all metadata tags flow seamlessly into FCP X. This makes using KeyFlow Pro as a logger an excellent option. 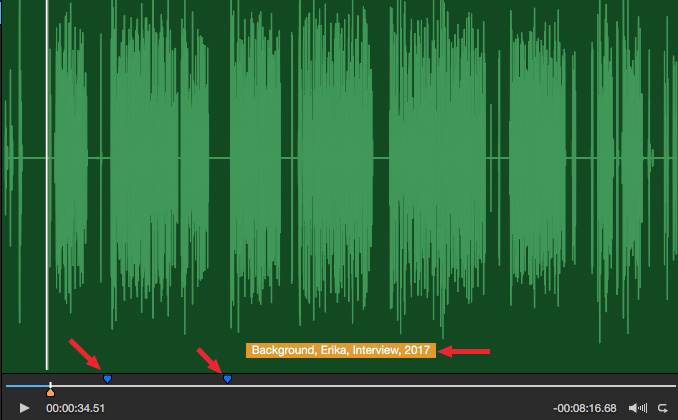 Another biggie is the ability to find, see, and annotate audio waveforms; including adding markers, Favorites, keywords and keyword ranges to audio clips. As with video clips, all these tags transfer from KeyFlow Pro to FCP X.

OTHER NEW FEATURES IN THE 1.8 UPDATE

According to the Mac App Store, here are other new features:

NOTE: Here’s a list of all the new and recent features in KeyFlow Pro.

THINGS I WISH FOR

The first, and most important, change I would recommend Malgn consider is having a native English speaker review all their written materials on both the web site and user manual for accuracy and clarity. Because so many terms are the same as those used by Final Cut, but don’t have the same function, it is very easy to get confused. Worse, there are typos in several dialog boxes.

My second request would be adding a glossary to the beginning of the user manual that defines key terms and explains how they are different in KeyFlow Pro compared to Final Cut Pro X. The hardest documentation to write is how to get started as a new user. Malgn’s User Guide is good for existing users, but inadequate for someone learning the application for the first time.

It would also be good to discuss key preference settings before explaining how to import media. Many choices are made using preferences that new users will not be aware of. There also needs to be a clearer explanation of what security access is being granted when referencing files on a hard disk, as opposed to copying them into a Library.

KeyFlow Pro is powerful, flexible and, especially for workgroups, can speed the process of ingesting, logging and organizing media. Whether you are a single editor or part of a team, check out the 30-day free trial. The latest version makes KeyFlow Pro especially useful for editorial teams.

NOTE: This article just highlights a few of the features in the new version. I’ll give the program a more detailed look in my upcoming webinar. Registration is free – sign up here.