The right side of the Media Import window in Apple Final Cut Pro X contains a powerhouse of options for handling and processing media before you even import it into your project.

But, what I haven’t written about, though I cover it in my online training, are the options in Analyze and Fix. These fall into two categories:

Let’s take a look at these now. As you’ll discover, how and when you use these can make a big difference in the speed and reliability of your media imports. 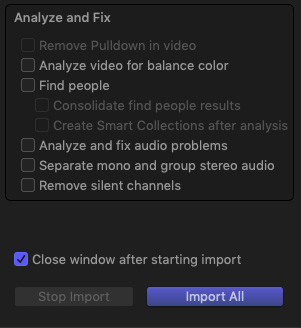 There are three video options:

In those most ancient of days long past, before video became both high-quality and affordable, filmmakers shot… film. (I know, I know; hard to believe.)

Film cameras were designed for theatrical use, meaning they shot 24 frames per second. However, video was either 25 fps or 29.97 fps, depending upon you geographic location.

NOTE: North America and Japan were 29.97, the rest of the world was 25. There’s a fascinating story about how these frame rates evolved, which you can read here.

In order to convert 24 fps film to display properly (i.e. without speed changes) on television, we would transfer it to tape, a process called “telecine.” This would duplicate frames of film across multiple fields of video. These duplicated fields were called “pulldown,” because of how the film was “pulled down” in the film gate of the telecine system.

NOTE: Here’s a technical explanation, from Wikipedia, of how pulldown is created.

This Remove Pulldown option removes these duplicated fields. Which is cool. However, pulldown ONLY applies to film transferred through a telecine onto standard-definition video tape. An excellent example of this is old newsreels. The reason the option is grayed out in this screen shot is because no media is selected that contains pulldown frames.

NOTE: Apple’s Help files add: “This option is available only when importing from a tape-based camera or device.”

Larry’s Recommendation: This is only relevant when working with old SD footage containing film transferred to tape. The only people likely to need this option are documentarians working with footage created prior to 1995.

Apple’s Help files state that this option: “Analyzes video clips to detect color balance and contrast. Color is automatically balanced when you add the clip to the timeline. You can turn automatic color adjustments on and off at any time.”

If you have footage that needs color correction, there are three benefits to using this option:

You can turn off automatic color correction at any time by selecting the clip(s) to which it is applied, then unchecking the Balance Color option in the Video Inspector.

However, this option has several disadvantages: 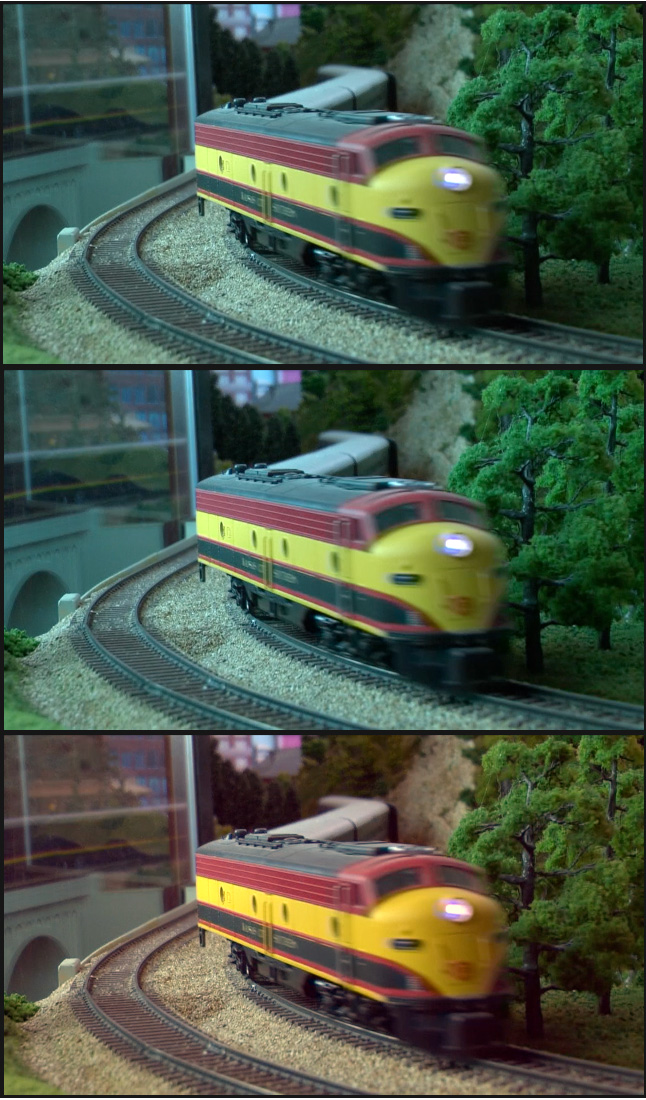 Larry’s Recommendation: Leave this unchecked. There are better color options in Final Cut.

Apple’s Help files state that Find people: “Analyzes video clips and still images for the number of people present and shot types. After analysis, any of the following keywords are added to the clips or clip ranges: One Person, Two Persons, Group, Close Up Shot, Medium Shot, and Wide Shot.

“Consolidate find people results: Consolidates all of the “find people” analysis keywords into one shot type keyword and one people keyword for every 2-minute segment of video. The shot type keyword chosen is the one for the widest shot type, and the people keyword chosen is the one representing the most people. For example, if a video segment contains Medium Shot, Wide Shot, One Person, and Group keywords, the segment’s analysis keywords are reduced to Wide Shot and Group during consolidation.

This feature was in the original release of Final Cut. I experimented with it at the time and discovered that the analysis was REALLY slow. So, I haven’t played with it since.

To test this again, I imported three clips with all three options turned on. The clips appeared immediately in the Browser.

Opening the Background Task window (Cmd – 9) showed the state of the clip analysis. While this runs slower than real-time, the actual speed depends upon the CPU speed of your computer, as well as the clip duration, frame size and frame rate. These clips were about ten seconds each. Analysis ran close to real time. 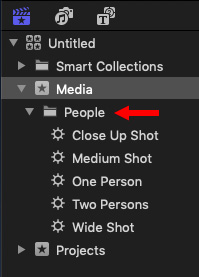 When the analysis was complete, new analysis keywords appeared in the Event containing the imported media. 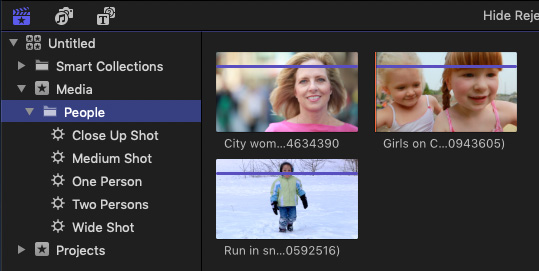 Here you see my three imported clips. (The purple horizontal bar indicates that portion of a clip that has been analyzed.) 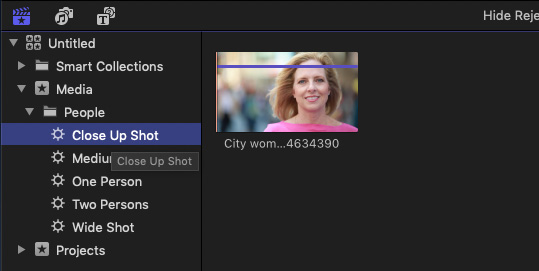 Here’s an example where this analysis is helpful. 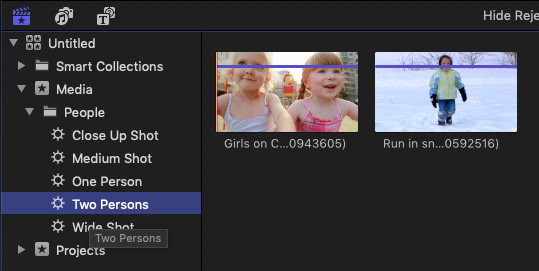 Here’s an example where the analysis is not. (The two girls are on a merry-go-round, while the single girl is running in the snow. Both shots run 15 seconds.)

I really like the idea behind this analysis. But, it takes time, requires extra storage space and isn’t highly accurate.

Larry’s Recommendation: Experiment with this, but I leave it unchecked. 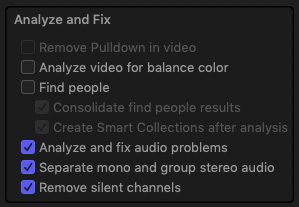 There are three audio options: 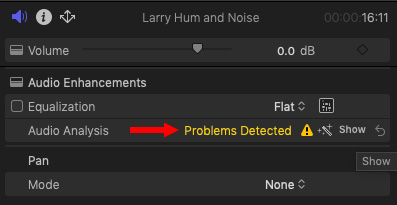 For example, here’s a clip that has both hum and noise, indicated by the yellow “Problems Detected.” In the Audio Inspector, hover the mouse near the “magic wand” icon and click the word Show. 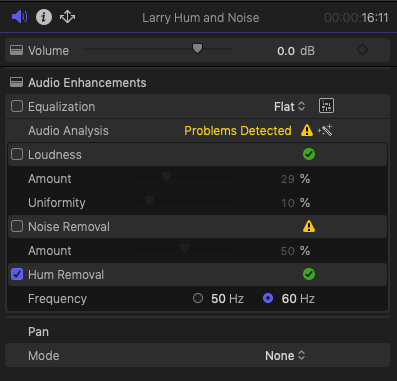 There are three problems this tests for and, potentially, fixes:

In this screen shot:

Uncheck any option if you don’t like the way FCP X fixed the problem. Adjust a setting to adjust the amount of the fix.

Larry’s Recommendation: Always check this, because it may fix problems you don’t immediately notice and you can easily change these settings at any time later in the Audio Inspector.

Apple’s Help files state that: “Audio channels are analyzed and grouped as dual mono or stereo, depending on the results of the analysis. Automatically corrected audio channels are marked as Auto-selected.” 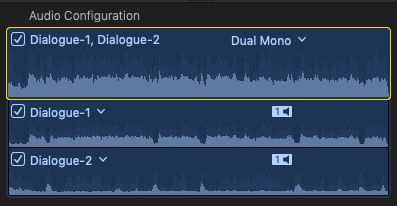 To adjust these settings, select the clip(s), then, at the bottom of the Audio Inspector, change the Audio Configuration.

Larry’s Recommendation: Leave this checked. This option doesn’t always get the settings right, but an incorrect setting is easy to change. I enable this for all my imports.

Apple’s Help files state that: “Audio channels are analyzed, and silent channels are removed. Clips that have had channels removed are marked as Auto-selected.”

Unstated in this short description is that this setting ONLY applies when you import audio clips containing more than two channels. However, as I was writing this article, even though I use this setting constantly, I had trouble making this work. 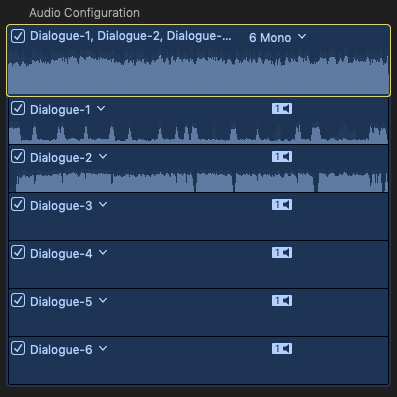 For example, here’s a six-track AIF clip that was added to the Final Cut timeline with this setting unchecked. Notice that all six tracks are imported, even though the bottom four are empty.

NOTE: For whatever reason, this AIF file could NOT be imported. The only way I could add it to Final Cut was to drag it into the Timeline. I have no idea why. 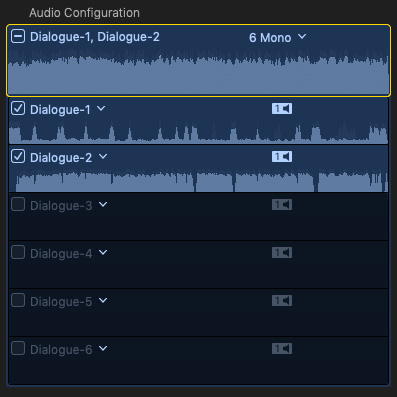 When this option is turned on, what’s SUPPOSED to happen is that the clip is imported and all empty channels are turned off; as illustrated in this screen shot.

HOWEVER, not only could I not import this multi-channel AIF clip, this setting did not turn off the empty tracks. This is a different behavior that seems to have changed in the past, but I don’t know when. I needed to change the track status manually to create this screen shot.

Larry’s Recommendation: I check this on, but, currently, I expect it not to work. 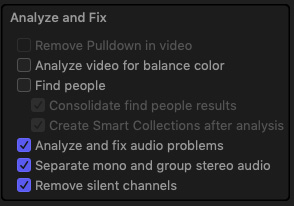 The video settings take a long time to analyze and require a lot of extra disk space. The audio settings analyze very quickly, even though these, too, are not totally accurate. Still, none of these damage any files and all are easy to change in the appropriate Inspector.