While Soundtrack Pro is discontinued, Adobe Audition is going strong. And, for audio mixing, Audition is a very capable program.

Although Adobe Audition and Premiere Pro are designed to work smoothly together, that doesn’t mean you are limited to only using Premiere Pro with Audition. In fact, there is a very nice, very fast, way to move projects between Final Cut Pro 7 and Audition, which I want to show you here.

There are two ways to get audio files out of FCP for use in other applications:

And, believe it or not, the older technology of OMF is actually the better choice!

NOTE: The recommended technique illustrated here will work with FCP HD, 5, 6, or 7. 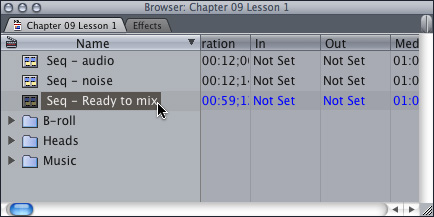 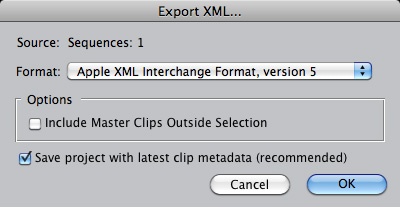 Select the highest level of XML supported by your version of Final Cut. In the case of Final Cut Pro 7, this is XML version 5. The XML file contains all your media as individual clips – both audio and video – as well as all levels, pans, and transitions.

Find a location and save the file. Even complex sequences save blindingly fast. 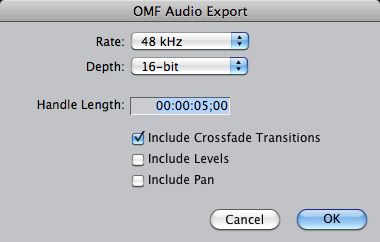 The other option is to export an OMF (Open Media Format) file. This format died long ago and hasn’t been developed or supported by anyone for the last century or so. Naturally, that means we use OMF every day in professional post-production to move files from Point A to Point B. Weird, but true.

In the resulting dialog box, leave the Rate set to 48 kHz and the Depth to 16-bit.

I’m of two minds about the bottom three check boxes. Generally, even for projects that I’ve edited, when the files are loaded into the audio application, I tend to remove all levels, pans and transitions that I applied in the video editing application and redo them as part of the audio mix. So, in my case, I leave the three bottom check boxes unchecked.

Checking them won’t hurt anything, it simply means that you are passing these settings from FCP to Audition. However, most audio engineers assume that the levels set in the video editor are only rough and reset them back to their default settings as they are getting the file ready to mix. It’s your choice.

Click OK, give the file a name and location and save it.

OMF files, unlike XML, only contains audio. If you want to see the video from your edit as an aid to the audio mix, you will need to export it as a separate process.

The video you export for Audition does not need be good quality. All you are using it for is timing. So, don’t worry about making the video full-size or perfect quality. Speed is the key word here. So is simplicity.

Again, select your sequence to export in the Browser.

The default settings are fine, but if you want to get fancy – or faster – you can make the following changes. 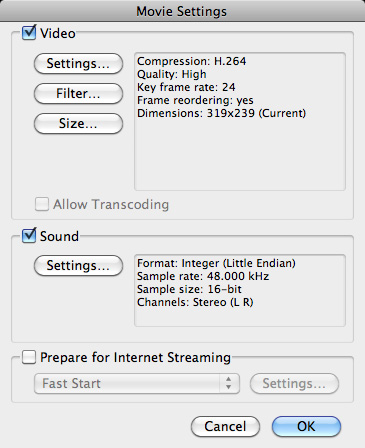 Uncheck Prepare for Internet Streaming. That isn’t relevant when you are playing the file from a hard disk. 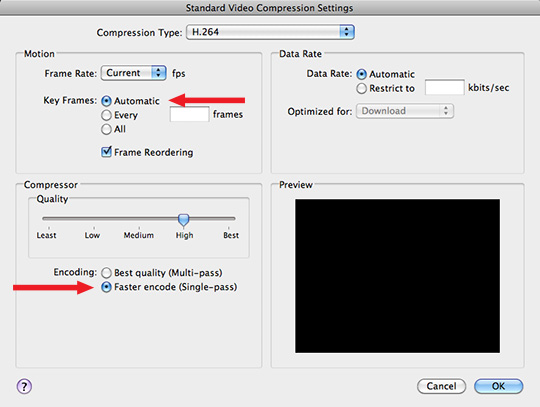 Leaver everything else alone. Well, OK, yes. You can change things and tweak. But it isn’t necessary. This is just a temp file, used only for audio mixing. Don’t waste your time here.

You would think that, because it is newer, XML is the best choice for bringing audio into Audition. You would think so, but you’d be wrong. The problem with using XML is that only the first video clip comes across and most of your audio files have broken links.

To import an XML file, open Audition and select File > Import > Files. Audition is smart enough to know this is an XML file and brings everything in. 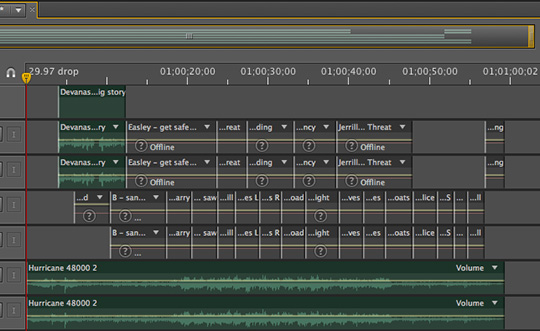 Notice in the Timeline only one video clip is in the V1 track. And most of the clips in A1, A2, A3, and A4 tracks are off line – indicated by a dark gray box. While XML does support transferring both audio and video, in actual fact, its a mess.

A much better way to work is to use OMF – which is why this works for so many versions of Final Cut, because OMF has been around for a long time.

To import an OMF file, open Audition and select File > Import > Files. Navigate to where you stored the OMF files and select Open. Audition senses that this is an OMF file and springs into action. 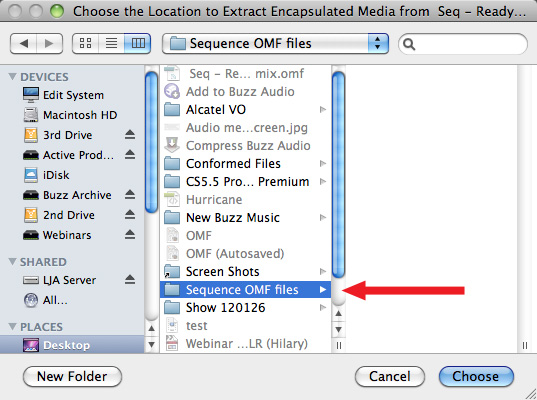 Audition needs to create local copies of the transferred files, so it asks where it can store them. I created a folder called “Sequence OMF Files” (you can call this anything you want) and I selected it in this window.

Very, very quickly, Audition copies the files into this folder, then creates a series of technical files called “PKF”, which it uses as part of the Timeline in Audition. 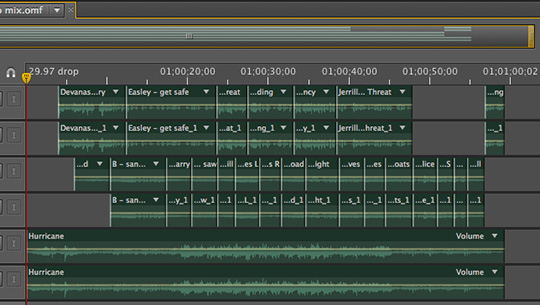 After a few more seconds – and this really does move quickly – all the clips are displayed in the Timeline, ready to edit.

Without question, OMF is the preferred way to move files from FCP to Audition.

Except…. there’s no picture.

Change the Workspace to Edit Audio and Video. This allows you to see the video clip, once you add it to the Timeline.

To add the video file we exported earlier to your Audition multitrack sequence, select File > Import > File, navigate to the video file and select it. 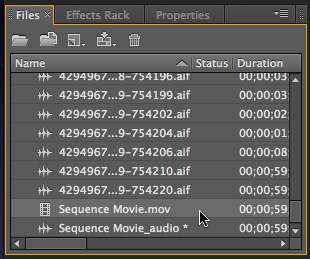 Notice, in the Files pane, your movie now exists as two files – one video and one audio.

The video file is inserted at the position of the playhead into the video track of Audition, and the picture appears in the Video tab in the top left corner of the interface.

You are now ready for editing.

NOTE: This OMF transfer process works the same for any video editing application that supports OMF, not just Final Cut. You simply need to export in two stages: audio first, then video. 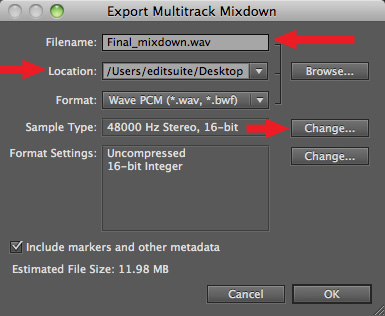 This dialog determines the final specs of your exported audio.

Give the file a name and location.

Leave the Format as WAVE – this is the default format of Audition. It is fully uncompressed, totally supported by Final Cut Pro, and exports FAR faster than AIFF. 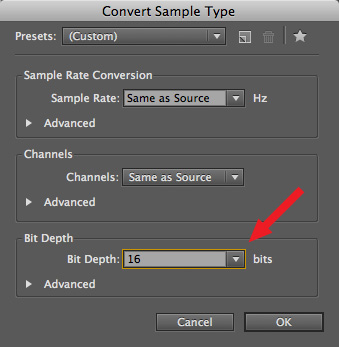 Click the Change button next to Sample Rate and change the Bit Depth to 16-bit.

Click OK to create a WAVE file of your entire Audition project.

Reopen your video edit in Final Cut Pro and select File > Import > File. Select the file and, after importing, edit the mix into the lowest audio track in your timeline. 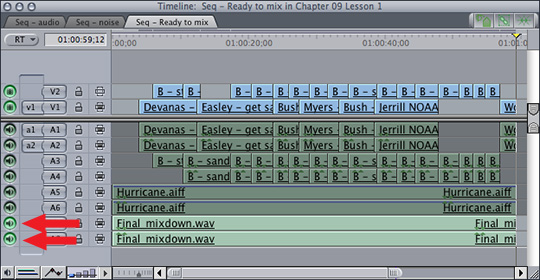 Keep all the original clips, in case you ever need to remix your audio. Then, turn on JUST the two green visibility lights for the mix tracks, and turn off all the rest. This mutes all tracks except for your mix.