FCP X: Trim Under a Transition

Trimming is the process of adjusting where two clips – either audio or video – touch in the Timeline. (Trimming can not be done in the Browser.) There are many reasons why we trim, but the three most common are:

NOTE: Here’s an article that describes trimming in more detail.

Recently, a reader emailed me a question about how to trim two clips that are covered by a transition. The process is easy, but not very obvious. Here’s how.

To ripple trim the Out of the out-going clip, grab the small “thumb,” indicated by two vertical lines in the top right corner of the transition, and drag left or right.

To ripple trim the In of the in-coming clip, grab this small “thumb,” indicated by two vertical lines in the top left corner of the transition, and drag left or right.

To roll trim the ends of both clips, grab the white bow-tie in the top center of the transition icon and drag. What you are doing here is moving the edit point itself, the place in the timeline where the two clips touch.

When one or both clips contain audio and the audio is displayed as attached waveforms, as it is in this example, trimming the transition affects both audio and video.

Notice, that because the transition was applied before the clips were expanded, that fades were automatically applied to the end of the first clip and beginning of the second clip. 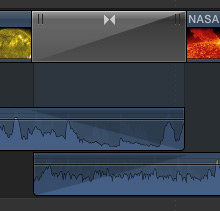 However, when audio is expanded – Clip > Expand Audio/Video – we have two additional options: 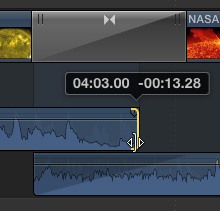 Using the Arrow tool, we can drag just one end of an audio clip longer or shorter. As soon as you start to drag, the fade dot is reset to the end of the clip; removing the audio fade that was put there automatically. This is the same as doing a Ripple trim to one of the clips. 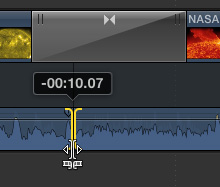 Or, we can drag the two audio clip ends so they touch, as illustrated here, then use the Trim tool (Shortcut: T) to drag both clip ends at the same time. This is the same as doing a Roll trim, though without using a fancy icon to indicate it.

One Response to FCP X: Trim Under a Transition