I have a love/hate relationship with the audio effects and filters in Final Cut Pro X. The filters themselves are amazingly powerful, which I love. But they can only be applied to individual clips, not “tracks,” which make them very cumbersome and slow to use.

This is why I rarely write about them – in concept, they are great. In practice, they are a mess.

However, recently Emory Schley wrote and asked if I could explain how to use the DeEsser effect in FCP X. As someone who has been accused of having somewhat sibilant “ss’es” I can appreciate why an editor would want to use this effect.

So, here’s how it works.

All sound is made of up vibrations; pressure waves that radiate from the source to the receiver; from the mouth to the microphone, in our example. The waves are measured in vibrations per second, which are called frequencies and displayed as Hz (Hertz).

NOTE: Try this yourself. Say the two letters and feel that both are formed almost the same way in the mouth; the only essential difference is the presence of the hiss.

Whistle/sibilance frequencies can vary widely. Always listen to make sure you are removing the portion of the sound you expect.

The problem is that, sometimes, that hiss develops a whistle. This whistling ‘S’ is called “sibilance” and, taken to extremes, is unpleasant to listen to.

What the DeEsser effect does – whether in Final Cut, or any other application – is reduce the offending hissing frequencies without damaging the rest of the sound.

Here’s how this effect works in Final Cut Pro X; the process is the same in other applications, though the filter interface is different. 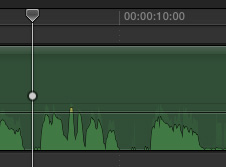 Here’s an audio clip with multiple “S” sounds in it.

Open the Effects Browser (shortcut: Cmd + 5), scroll to the Voice category and look in the Logic sub-category for the DeEsser effect. (These effects are also commonly called audio “filters.”)

NOTE: These audio filters first appeared in Final Cut Pro as part of Final Cut Studio suite of applications (specifically FCP 5). They were developed for Logic and have long been considered world-class. Apple provided these filters in Final Cut Pro X as part of its initial release.

Drag the DeEsser effect onto the clip you want to clean up.

Open the Inspector (shortcut: Cmd + 4), click the Audio tab and click the icon to the right of the DeEsser title. 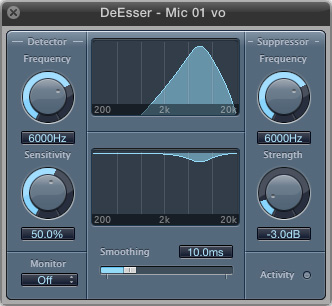 This opens the DeEsser interface which allows us to tune the filter to find the harsh “S” sound that we want to remove, then determine how much of the sound you want to remove.

NOTE: You generally only want to reduce the whistling sound of the “S.” If you remove the hiss entirely, you just changed the “S” to an “F,” which is not what we want to do. 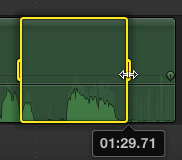 To adjust the filter to your specific clip, use the Range tool (shortcut: R) to select a portion of the clip with a lot of “S” sounds.

In the View menu, turn on Loop Playback (shortcut: Cmd + L), then choose Play Selection (shortcut: /). This begins a continuous playback of the selected area. (Press the spacebar to stop playback.) 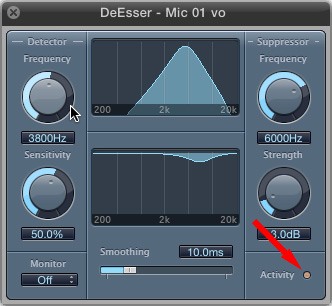 With the clip playing, alter the Detection Frequency by dragging the dial in the upper left until the Activity light in the lower right glows every time you hear a strong “S.”

To hear your selection more clearly, switch the Monitor from Off to Sens. This allows you to hear just the portion of the sound you are “sensing.” Adjust the Frequency Detection setting until you hear the “S” as clearly and loudly as possible.

NOTE: This is called finding the “center frequency” of a sound. 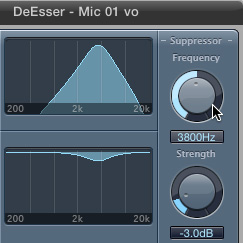 Next, adjust the Suppressor Frequency to match the Detection frequency.

NOTE: Sometimes it is easier to detect an underlying frequency, the “S,” then remove the whistle, which is at a different frequency altogether. This is why there are two separate frequency controls. 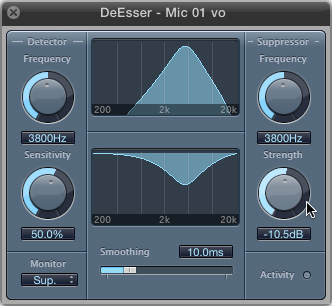 Finally, set the Monitor menu to Sup. to enable Suppression and adjust the Strength until the harshness is reduced, without removing the “S” sound entirely.

NOTE: I generally don’t mess with the Sensitivity dial or Smoothing slider. You are welcome to play with them and see if they improve the sound.