There’s a lot of confusion about when we can “import” a clip vs. a portion of a clip (called a clip “range”) into Final Cut Pro X. This thought was brought to mind this week with an email that Jerry Serra sent. He wrote:

I just learned how to import portions of the above type clips into Final Cut. My previous work flow was to copy only the mov files on the memory card to an external RAID drive, then import into Final Cut Pro X from the external drive. With this work flow I had to import the entire clip and then select the portions I wanted. Now I copy the entire DCIM folder from the memory card to the external raid drive. Now, when I import into Final Cut I can select the portion(s) of each clip that I want to final cut.

Not sure this approach is well known but thought I would share with you.

First, I want to define “import,” because, to quote The Princess Bride, this “may not mean what you think it means.”

When you choose Leave files in place in the Media Import window and import a file, Final Cut Pro X only stores the file name and path that points to that file. It doesn’t copy the media, move the media or add the media file itself in any way into the Library.

This is directly analogous to the card catalog in a public library. FCP X simply copies the reference card in the card catalog. The book itself remains on the shelf and doesn’t move.

NOTE: To be truthful, along with storing the location of the file, FCP X also imports a ton of metadata about the file and creates thumbnails of both the image and audio waveform data. But the source file itself is untouched and unmoved.

However, when you choose Copy to library in the Media Import window and import a file, FCP X will copy (not move) the source file from wherever it is into a specific folder inside the Library itself.

NOTE: In the Finder, a Final Cut Pro X Library is actually a “super-bundle,” a special folder that acts like it is a single file.

Copying files into the Library is ALWAYS recommended when you are importing directly from a connected camera or camera card, because if you don’t, when that card is disconnected from the computer, you lose access to all of the data stored on it.

NOTE: As a Best Practice I strongly recommend that you copy the ENTIRE camera card to its own folder on your locally attached storage (as Jerry discovered and wrote about). Don’t pick and choose folders, copy everything. This is really important. Then, import media from the folder on your hard disk.

One folder per camera card. Never put the data from two cards in the same folder, the new data will erase the old data.

The big benefit to Leave files in place is that you are not duplicating media, which reduces your storage requirements.

However, you really aren’t “importing” anything – all you are doing is making a reference to where that file is stored. This means that trying to import a range doesn’t make any sense; it would be as illogical as asking the card catalog for the data on page 57 of a book. The card catalog only points to the location of the book, not the contents inside it.

You don’t have access to the actual contents until, using our library example, we walk over to the book shelf, grab the book, bring it back to our table, open it and start taking notes. The same thing with Final Cut. We don’t have access to the contents of a clip until we open it for editing inside FCP X, because prior to that we are only tracking the address of where the file is stored.

This is why we can’t import a range within a QuickTime movie – we are only importing a reference to where the movie is stored, not the movie itself.

NOTE: There’s another reason for not creating ranges of a file. Since creating a range always means duplicating a portion of a clip, Apple chose not to allow this as a general option because they didn’t want to run the albeit small risk of duplicating a clip and somehow damaging image quality.

WHERE THINGS GET CONFUSING

Importing gets confusing, though, when dealing with cameras that record in very compressed formats, such as H.264, AVCHD, P2 XDCAM and others. Due to limitations in camera card storage bandwidth, these cameras can’t record a high-quality uncompressed image. Instead the media is highly compressed and, most often, elements of the image are stored in multiple places on the card.

For example, AVCHD stores media in a Private folder. 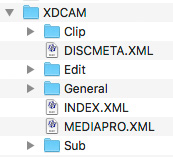 XDCAM uses a variety of different folders to store media.

The DCIM folder that Jerry referenced is used by most digital camera manufacturers, such as Canon, Nikon, and Olympus, as well as some cell phones to store the photos captured by the camera. DCIM, short for “Digital Camera Images,” is a folder that is automatically created on flash memory cards by digital cameras.

The problem is that if we only copy the DCIM folder to our hard disk, in a mistaken effort to save storage space, we omit critical metadata stored outside the DCIM folder that is necessary to reconstitute the file.

TO CAPTURE A RANGE

In order for FCP X to import just a range of a clip, it MUST copy that clip into the Library. It is not possible to create a pointer that points to a range within a clip. You can either point to the entire clip or copy a portion of it.

In order for FCP X to copy a portion of a clip, it must have access to the metadata, such as timecode, frame rate and other technical information about a clip, that is generally not stored in the media file itself, but in one of the related folders elsewhere on the camera card.

If only the media file is copied to your hard disk, the metadata which is necessary for locating and copying a clip range is not accessible to Final Cut. Because of this, it can’t copy the clip range.

Making things even more complex, some cameras don’t even record a unified media clip. Instead, the video file is stored in one location, audio in a second, timecode and other metadata in a third. In this example, FCP X can’t point to a clip – because that clip doesn’t actually exist, only pieces of the clip. Therefore Final Cut doesn’t allow the “Leave files in place” option. Instead, it requires you to Copy files to the library so that all the different elements can be combined into a single clip.

In all instances where FCP X requires reconstituting a clip we have the option of importing a range, provided that all related metadata is available. This will always create new media and, by default, will be stored in the library.

A WORKAROUND FOR QUICKTIME

If you are shooting massive amounts of media which exist as QuickTime movies, and you only want to work with smaller chunks – say to share between editors – you can use Compressor to open existing QuickTime files and transcode just the range you specify into a separate media file. For media shot with most cameras, I would transcode into ProRes 422.

Remember, creating stand-alone ranges of a clip always means creating a copy of a portion of a source file. You can’t create or import a range without creating a copy.

Conserving storage space is, generally, a good idea. And the Leave files in place option in Final Cut makes that choice simple and straight-forward because we never import clips, only pointers to where those clips are stored.

However, we do have the ability to import a clip range for many highly-compressed camera formats. Keep in mind that, in order to achieve this, we need to copy the entire camera card to a single folder on our hard disk, then import from there.

Importing a range, when the camera format supports it, always means creating new media which is stored in the library.