Recently, Jan wrote saying he was on deadline to export his final broadcast master, which needed to include both the final stereo mix plus all stems, then compress it into an MXF container. What did I recommend?

NOTE: A “stem” is a submix of specific audio, for example, just dialog, or effects, or music. Most often, these are stereo pairs of audio. In Jan’s case, the distributor also wanted a separate submix of all the atmospheric audio effects.

Jan had sent his project to an audio post house for audio sweetening and final mixing. Now, he needed to marry the five stereo pairs from the audio house with the video and titles in Final Cut, then export the final master file for compression and distribution.

In situations like this, I always recommend exporting a high-quality master file from Final Cut, which includes multichannel audio. Then, use the MXF settings in Apple Compressor to create the final distribution format.

NOTE: The HDCAM MXF settings in Compressor seem to match most broadcast specs. In Jan’s case, they did.

However, in the 10.4.1 update to Final Cut, Apple changed how Roles are exported. So, in this article, I want to explain how the new system works. 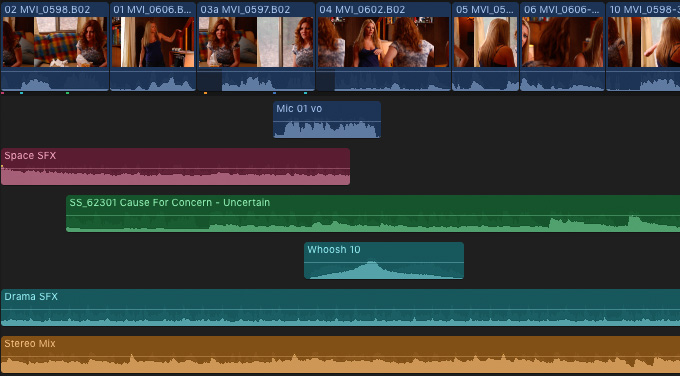 Here’s the sample project we’ll use today. It contains:

While there would generally be far more clips in each of these categories, the process is the same, regardless of the number of clips involved.

Before exporting, it is important to assign Roles to all clips, including submixes and final mix. Here’s an article that describes how to use Roles in more detail. 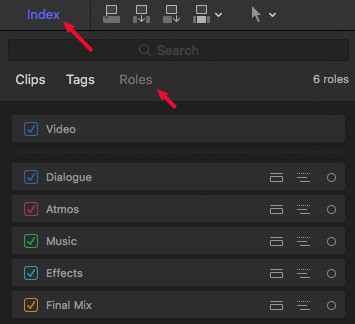 As you can see here in the Timeline Index, I have five Roles. A project can easily have more than just these five, because, as you’ll see, you fully control which Roles export. For example, I could have all the source audio – with their set of Roles – plus stem submixes – with their own set of Roles – plus the final mix – with its own Role, as well.

As you look at the screen shot above, notice that the Roles are not necessarily in any particular order – except that Dialog is on top. In fact, FCP X allows you to change the stacking order of all the clips in a Role simply by dragging the Role name in the Timeline Index up or down.

To export a master file, which is the highest-quality export we can make from FCP X, choose File > Share > Master File. (Default shortcut: Cmd + E) 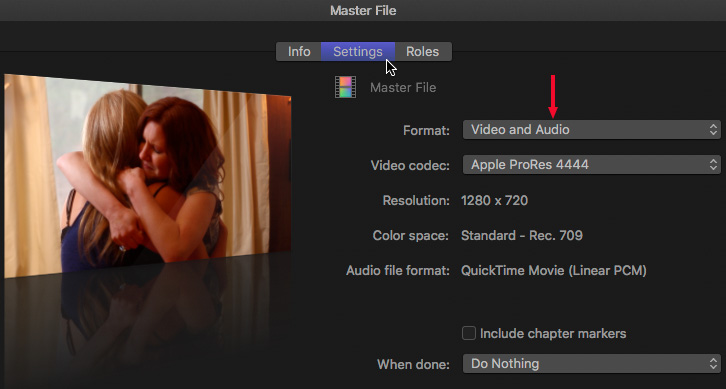 In the Settings window, adjust whatever you need, however make sure you are exporting both Video and Audio. (I know, this seems self-evident, but it is easy to overlook if you don’t check this screen.)

Then, click the Roles text button at the top center. 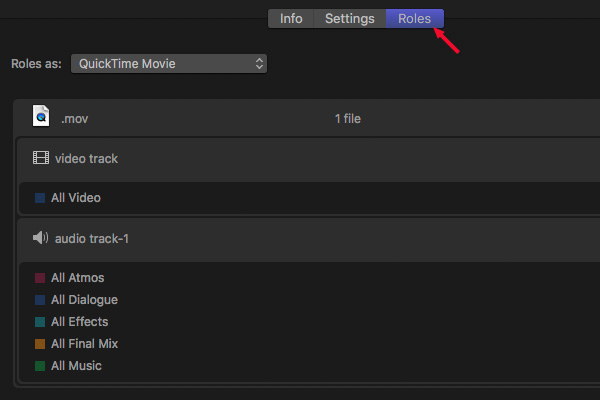 By default, FCP X wants to export everything all mixed together into a single stereo pair in a QuickTime movie. This is exactly what we DO NOT WANT!

Change the “Roles as:” menu to Multitrack QuickTime Movie. 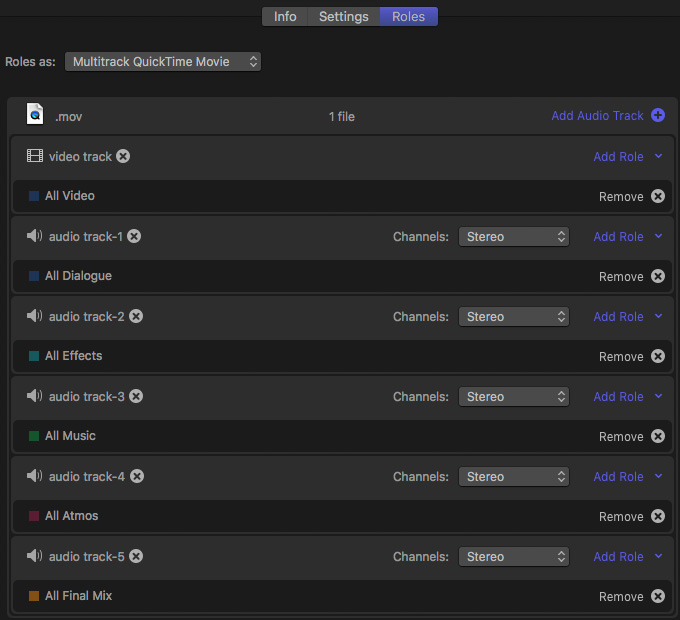 This window now shows each Role displayed in its own track. However, the stacking order is incorrect. Most distributors have a very specific track order that they need for compatibility with their own systems; generally starting with the Final Mix on tracks 1 and 2. (Remember that a stereo pair contains two tracks of audio – left is always on track 1 and right is always on track 2.)

In this window, we can’t drag Roles up and down as we can in the Timeline Index.

So go to the right of every audio track and click the Remove (x) button until all audio roles have been removed.

NOTE: Since we are only working with audio here, all the Video and Title roles can be left as is. 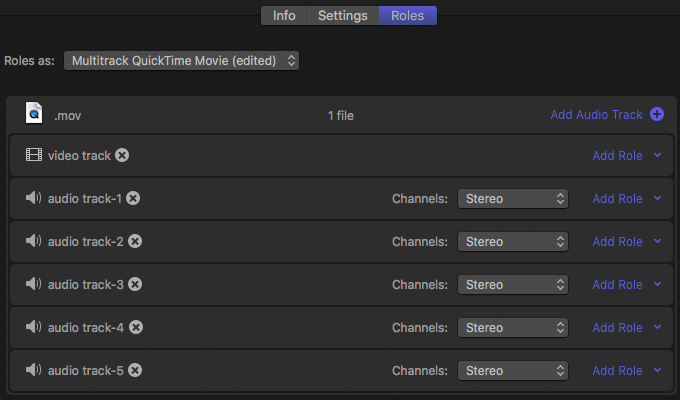 All the audio Roles are now gone. If you were to export this file right now, there would be no audio in it.

NOTE: Except, in a fit of exuberance, I forgot to read my own note, so I also deleted the Video and Title roles. Sigh… oops.

Go to Add Role on the right and, starting at the top of the Audio section, add the Roles in the order you want them to export. The distributor requested this order: 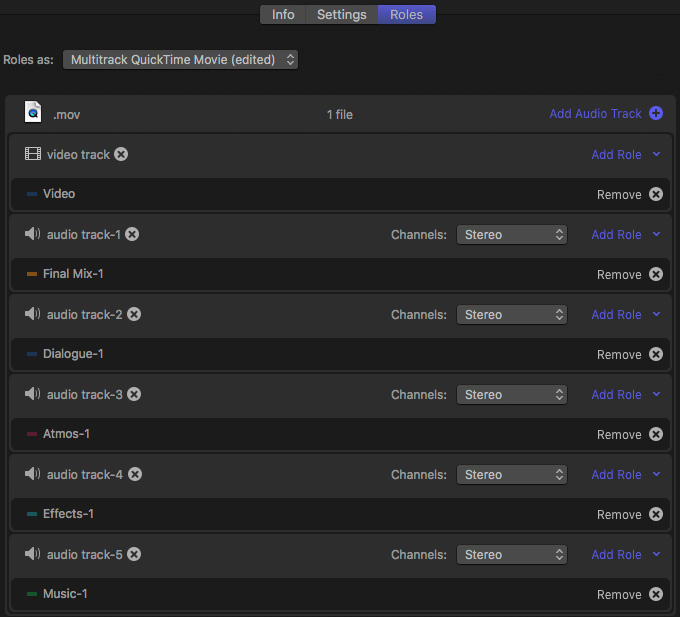 Here’s what the final track assignment looks like, ready for export. When you are done, you are good to go. Click Next at the bottom right to display the File Save dialog.

By the way, if you need to switch an audio Role between mono, stereo or surround, click the Channels menu. The default is Stereo. 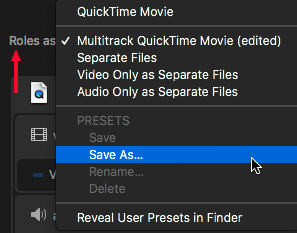 If this is a Role assignment you plan to use often, save it as a Preset, by returning to the Roles As menu, and choosing Save As… 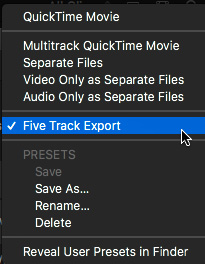 This preset now shows up in the menu with the ability to rename or delete it, as well as view it in the Finder.

NOTE: Yes, presets can be moved between computers as long as you put them back into the same folder on the new system. 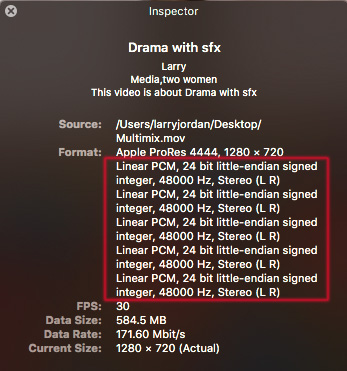 You can verify that all these channels exported by opening the file in QuickTime Player X and choosing Window > Show Movie Inspector. (Shortcut: Cmd + I)

Roles take a bit of getting used to. But, that time is very well spent. What I REALLY like about them – and I use them in every project now – is that a Role makes working with dozens, even hundreds of clips easy because I’m no longer adjusting individual clips, but the Role that contains all of them.

And I like the new ability to save frequently-used Role assignments as presets.