One of the big new features in Final Cut Pro X (v. 10.3) is the expanded role of Roles; so to speak.

When I first discovered Roles, I found them confusing. As I’ve been working on my video training for this new version, I’ve come to understand them better, as this article explains.

Subroles are categories within Roles that allow us to refine our control. For example, in the Titles Role, we could create subroles for English, French and Spanish. This would allow me to see all titles, or just English, or both English and Spanish titles.

Lanes are a way for us to group and display common audio elements by Role in the Timeline to simplify mixing.

For me, “organization” is the key concept to understanding Roles. We use them to:

When you import a clip, Final Cut automatically assigns a Role, based on what it guesses it might be – dialogue, sound effect, or music. (And, when it isn’t sure, it assigns it to the “Dialogue” Role.)

You can override automatic Role assignment using this popup menu on the right side of the Media Import window. However, personally, I wouldn’t worry about it here, unless you are importing hundreds of clips and you are sure they all fall into the same category.

NOTE: The main reason for not obsessing about Roles at import is that they are easy to change later.

Once a clip is imported into your project you can change its Role in the Modify menu, Browser, Inspector, Timeline, or Timeline Index. (Which gives you an idea of how important Apple feels Roles are.) 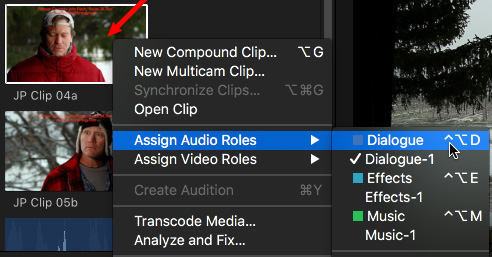 To change a Role, right-click (Control-click) a clip and select Assign Audio Role (or Assign Video Role), then choose the most appropriate option.

NOTE: You can create, modify or delete Roles or subroles at any time. Roles are stored in the Library and can vary from one Library to another.

In this screen shot, I’m changing the Role to Dialogue. (The indented Roles are called “subroles,” and allow us greater categorization within a Role.) You can change the Role assignment at any time. 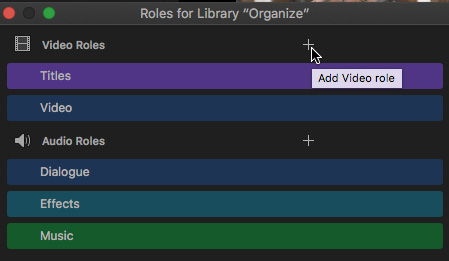 The easiest place to create Roles and Subroles is Modify > Edit Roles. This opens the Edit Roles window. Click the [plus] icon to create a new Video or Audio Role.

Here I’ve created three subroles – English, French, Spanish. To create more, click the “Show Subroles” text button, then the small icon to the left of it.

NOTE: There is no limit to the number of Roles or Subroles you can create.

VIEWING ROLES IN THE BROWSER 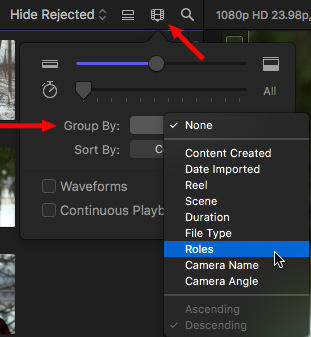 You can group clips by Role in the Browser by clicking the Browser display icon and choosing “Group By > Roles.” (Or, go to View > Browser > Group Clips By > Roles in the menu bar at the top.) 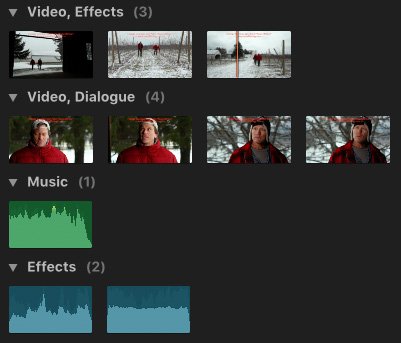 The Browser now groups clips by Role. (Remember, each clip can have only one video and one audio Role, which prevents confusion when sorting clips.)

ROLES IN THE TIMELINE

By assigning Roles to clips, Final Cut automatically groups similar Roles together, by shuffling layers, regardless of where the clips were initially placed. 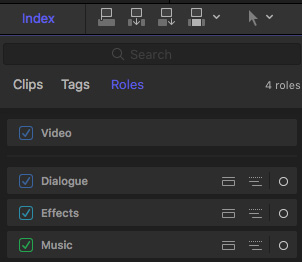 Roles are controlled from the Timeline Index. Here you see the simple project we’ve created so far. Open the Index by clicking the Index button, then the Roles text button at the top.

But, we can do far more with Roles than this.

For example, in this project, I’ve created multiple titles – one in English, one in French and one in Spanish. Rather than creating three separate projects, I’ve created one project containing all titles in all languages, then assigned a language subrole to each title. 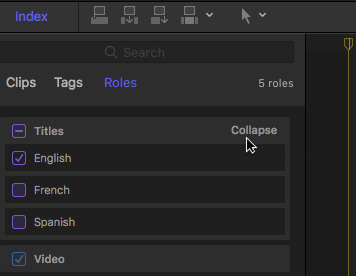 When we view this project in the Timeline Index, we can see the three subroles under Title. (If you don’t see subroles, click the Expand text button to the right of Titles.)

Here’s where things get interesting. Uncheck a subrole (or a Role, for that matter) and every clip assigned to it becomes invisible. Here, all my English titles are visible, while my other languages are invisible.

This control means I can create a single project, and add all my languages into to. I only need to edit it once, then use Roles to create as many different language versions as needed. This ability to selectively turn off specific Roles or subroles applies to both video and audio clips.

So far, while the interface has changed dramatically, Roles work the same in 10.3 as 10.2 But, when we move to the audio side of the Timeline, the changes become even more interesting.

Roles automatically organize the Timeline. Here, for instance, I have one layer with dialog (top), three layers with effects and one layer with music. Roles have already grouped each category into a single group – see how the effects clips are all together –  even though I didn’t edit them that way.

If I try to move a music clip up into the middle of the effects clips, it won’t let me. I can’t put an audio clip in the middle of a group of clips with a different Role.

But, if I drag the Music Role up in the Timeline Index…

…all music clips move up above the effects clips! And this would be true if I had multiple layers of music or effects clips.

Click the small “Focus” circle on the right side of the Music Role in the Timeline Index and all other audio clips are reduced to next to nothing allowing us to easily adjust levels, fades and other settings just to the music clips that we are focused on.

Combining the Focus (on the right) with the Lane button (on the left) for Dialogue reduces all non-dialog Roles to thin lines, while grouping and expanding all dialog clips into the Timeline so we can see all our dialogue clips at once and easily make changes.

Roles can help us tame even the most complex of projects. And, in a future article, I’ll write about their ability to combine with compound clips to provide the equivalent of audio buses and submixes specifically for creating audio stems for export.

NOTE: If you want to learn more about all the capabilities of the latest version of Final Cut Pro X (10.3), please purchase my video training. Learn more here.