Critical Facts To Know About SSDs [u]

(Updated 8/11/17 to include a link explaining Apple’s new File System.)

In the past, I considered SSDs just faster versions of standard spinning media hard drives (HDD). But, as I learned over the course of these reviews, SSDs are different and you need to know the differences to make the most of this new and much faster technology.

WHY PURCHASE AN SSD? 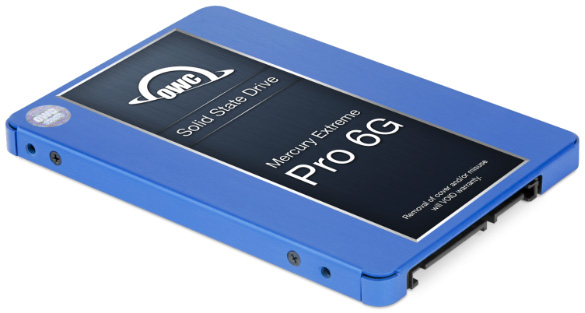 The principle reason for buying an SSD is superior performance. But they have other desirable qualities as well:

The two big detriments to an SSD are: 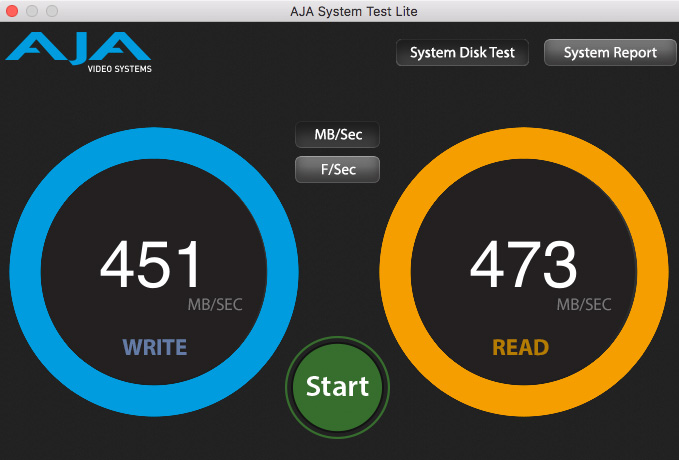 A single SSD transfers data around 400 MB/second (MB/s). This speed was measured on an OWC Mercury Extreme Pro SSD, using the AJA System Test Lite software. This compares to about 125 MB/s for a traditional spinning media hard disk drive (HDD). So, a single SSD is about three times faster than a single HDD.

For example, depending upon codec, frame size, and frame rate, the export speed of an NLE will vary from 8 MB/s to 200 MB/s. Even a single SSD is more than fast enough to support any file creation or export from an NLE.

However, you will see benefits from these faster read speeds in multicam editing and editing high-resolution, high-bit-depth video in both editing and color grading.

You will also see benefits when duplicating files where speeds can exceed 500 MB/s, meaning that a 25 GB file will duplicate in less than a minute. Copying files between the computer and an SSD drive can also be very quick, depending upon what your computer uses for an internal hard disk and the speed of your Thunderbolt connection. 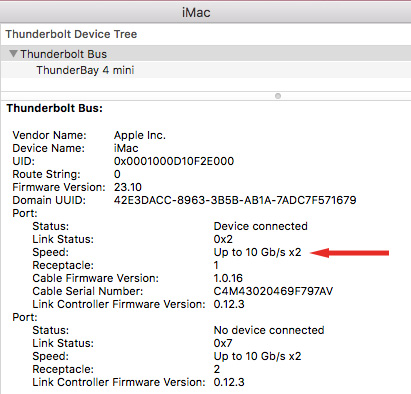 Any Thunderbolt device will only be as fast as the slowest link on the chain. For example, the iMac I’m using to write this article only has a Thunderbolt 1 connection.

To determine the speed of your Thunderbolt connection, chose: About This Mac > System Report > Thunderbolt. Your link speed is indicated in the section titled “Thunderbolt Bus.” (Indicated by the red arrow above.) Thunderbolt 1 is “up to 10 Gb/s,” Thunderbolt 2 is “up to 20 Gb/s,” while Thunderbolt 3 is “up to 40 Gb/s.”

NOTE: If you only have FireWire, don’t buy SSDs. FireWire is too slow to support the full speed of a single spinning media hard drive, much less an SSD.

NOT ALL SSD DRIVES ARE THE SAME

As we all know, SSD drives are expensive. So, one of the techniques manufacturers use to keep prices down is to change the performance specs of the SSD itself. Slower speeds cost less to make.

Other manufacturers have multiple product lines for the different customers that want to use SSDS; not everyone needs the highest performance, many folks like the low noise and ruggedness that SSDs provide.

When buying an SSD, price will directly determine performance.

DO SSDs LAST AS LONG AS HDDs?

Essentially, yes. If there are manufacturing problems, an SSD will fail almost immediately; similar to an HDD.

If an SSD operates successfully for a couple of weeks, it should last as long or longer than a similar HDD.

When using HDDs in a RAID, we’ve learned to format the RAID as Level 0 for maximum speed or RAID 5 to balance speed with the ability to recover our data in the case one drive dies.

NOTE: Here’s a description of the different RAID Levels.

Given the far superior speed of an SSD, this advice changes: SSDs should be formatted as RAID 4.

The reason why is that a RAID 5 distributes parity, the data that allows us to recover our media when a hard drive dies, across all four drives in a RAID. This means that we need to read from all four disks to get all our data, then throw away 25% of the data we just read which is the parity information which we don’t need (when the RAID is running properly).

In a RAID 4, all the parity data is stored on a single drive. So, with SSD, we only need to read from three of the drives, while throwing none of that data away. This improves performance between 20-25% than an RAID 5. This was born out when I tested the two different configurations. Because HDD’s are so much slower, that there’s no speed gain from using this technique.

“A TRIM command allows an operating system to tell an SSD which blocks of data are no longer considered in use and can be wiped internally. Because the low-level operation of SSDs differs significantly from hard drives, the typical way in which operating systems handle operations like deletes and formats resulted in unanticipated progressive performance degradation of write operations on SSDs. Trimming enables the SSD to more efficiently handle garbage collection, which would otherwise slow future write operations to the involved blocks.” (Wikipedia)

However, there was a lot of confusion about TRIM on the Mac because, “until version 10.10.4, Mac OS X natively enabled TRIM only for Apple-branded SSDs; third-party utilities [were required] to enable it for other brands. Old third-party TRIM drivers stopped working as of the Yosemite update. Updated drivers now exist that work with OS X Yosemite. In the Mac OS X update 10.10.4, Apple [also] added a command line utility, trimforce, that can be used to enable TRIM on third-party SSDs.” (Wikipedia)

WHAT WILL THE RELEASE OF THE NEW APPLE FILE SYSTEM HAVE ON SSDs?

This is a huge, unanswered question. I’ll have more on this as High Sierra gets closer to release. However, I expect the changes in the new operating system to be significant.

WHY DO WE GET DIFFERENT RESULTS WHEN USING AJA VS. BLACKMAGIC DESIGN DISK SPEED TESTS?

The difference lies in “compressible,” vs. “incompressible” data. Almost all media files use incompressible data; that is, data which has already been compressed in some form.

“About 4 or 5 years ago, maybe a bit more, one of the makers of controllers for SSDs realized that they could make SSDs with their controllers faster than anyone else’s by compressing data before writing it. I’m not sure they’re doing anything other than looking for blocks which are all zeros. They said that they were doing this to prolong the life of the flash memory but I think they just figured out that almost all the benchmark [testing] applications wrote out [blocks] of zeros as their test data.

“When I tested SSDs with these controllers I would see > 400 MB/s when reading and writing zeros and around 280 when using random data. Needless to say, this controller maker became a big name, and all the manufacturers who used these controllers bragged about how fast their SSDs are.

“There is however another difference, which is not attributable to incomprehensible data, between Blackmagic and AJA benchmarks. I don’t really know what the difference is, I just know that with HDDs (or SSDs which don’t compress data), I can get greater numbers with AJA. It could be that AJA allows you to simulate the data flow for a given codec and frame size whereas Black Magic does all testing with one block size. I definitely get faster numbers with large frame sizes and less compression.” (Tim Standing, CTO, SoftRAID)

In other words, SSDs that use controllers that know how to handle already-compressed data will have faster performance than those that don’t.

To learn more about SSDs and RAID systems, I spoke via email with John Licko, Senior Technical Service Representative for OWC to learn more.

Larry: I’ve read that SSD performance degrades over time and that SSDs generally don’t last as long as traditional spinning media. What kind of life should we expect from a Mercury Extreme SSD?

John: An SSD and a mechanical hard drive typically have the same lifespan now. Neither one has a specific life-time that it will last, however. SSDs used to slow down as they got older, but today that is no longer the case. Keep in mind, though, that it is not if any drive will fail, but when.

A general guideline we go by is that, while we sometimes see drives fail in the first couple of weeks, if it makes it past that initial time, you should be good for years to come. Essentially, if there’s not something wrong with the physical components of the drive, which should cause problems pretty quickly, your drive is good for the long-term.

Larry: Do SSDs exhibit a failure rate similar to HDDs – that is, they either fail at the very beginning or at the very end (a bathtub graph)?

John: You can tell when mechanical drives are going to fail: they start to have a noise, start to slow down, etc. SSDs will be working perfectly fine, the next day it fails. The timeline is generally the same, it’s just how it fails that is different.

Larry: Is it better to use SSDs when they will be used more for reading, writing or both? I’m concerned about how cells in an SSD die the longer the system is used.

John: With an SSD, read/write speeds are not going to potentially hurt the SSD over time. SSDs actually have IOPS Read/Write hours that allow a long lifespan. Most SSDs on the market now have around a 10-year lifespan, but each one differs depending on the manufacturer.

Larry: Can we store SSDs on a shelf for longer-term archiving?

John: SSDs need electricity to keep their data stable, so storing SSDs on a shelf for a long period of time can cause the data to becoming corrupt. This differs from mechanical HDDs where the data is magnetically written on the platters instead of digitally.

Larry: Is there any reason besides performance that we should consider when deciding whether to purchase an SSD RAID?

John: We’ll separate this question into two separate ones: SSD vs HDD unit and RAID vs Independent arrays.

SSD vs. HDD: SSD units are really only beneficial if you’re looking for speed. Their costs are going down, but they’re still significantly more expensive than hard drives. If you’re looking for large amounts of storage space and speed isn’t an issue, you’re going to want to go with a mechanical drive array; i.e. an HDD.

RAID vs. Independent: A RAID in general is beneficial if you would like to have either a continual confirmation that your data is extra secure or if you’re looking for more speed than what one drive can give you (depending on the RAID mode you’re in). However, if you’re the type of person that likes to have their backups in alternate locations (for example, one on your computer, one in your office at work, and one in a safety deposit box) then you don’t really need a RAID to keep a second copy of your data.

SSDs are not the same as HDDs. When we better understand what they are, we will also understand how to use them to get the performance we are paying for.

3 Responses to Critical Facts To Know About SSDs [u]