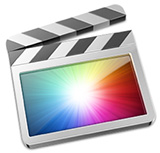 UPDATE: With the 10.0.6 update, Apple also gave us a keyboard shortcut to create real, honest-to-goodness freeze frames. Put the playhead on the shot you want to freeze and type Option+F. I’ll write more on this specific feature in a future article.

Apple changed the way we create still frames in Final Cut Pro X — and they also changed the name. 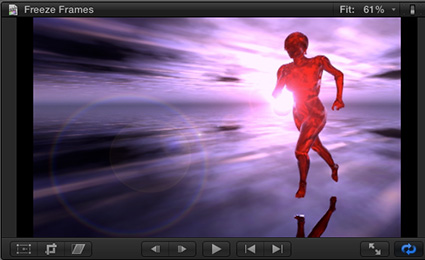 Whether you freeze them or hold them, what we want are images that keep still. Here’s how.

In the Timeline, put your playhead on the frame you want to hold and select the clip. When creating hold frames, I use the playhead, as I find it easier to work with than the skimmer. 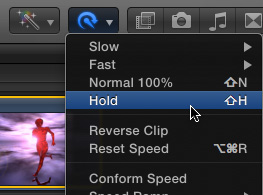 Using either the Retime menu in the Toolbar, or Modify > Retime, select Hold; or type Shift+H.

The Retiming editor appears over the top of a clip. There’s a color code in play here:

(This article only looks at freeze frames. I have an entire chapter on changing clip speed as part of my FCP X Effects video training.) 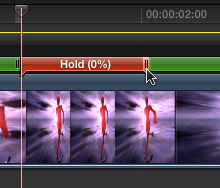 In a very slick new feature, you can change the frame that freezes by clicking the small, down-pointing arrow next to the Normal (100%) text in the preceding green bar and selecting Change End Source Frame.

This displays a small box around the frame that is frozen. Drag that box to whatever new frame you want to hold. This is far easier than recreating the entire effect, which we needed to do in FCP 7.

To remove a freeze frame do one of the following:

While I wish there was an easy way to enter a numerical duration for a hold frame, I really like how easy it is to change the frame that freezes.

Command+R — Toggle display of Retiming Editor
Shift+H — Create hold frame at position of playhead, or skimmer
Shift+N — Set clip speed to 100%.
Option+Command+R — Reset clip speed back to normal.
S — Turn on, or off, the skimmer