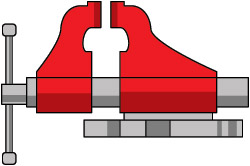 Bob Bailey sent me a great question this week:

“The audio gear I’m using is expecting 16-bit audio in the Linear PCM format. However, it seems that FCP X only exports 24-bit audio and doesn’t appear to have a way to adjust this setting. I looked at my Compressor and still didn’t see a way to change this setting. Any ideas?

Bob, you are correct, Final Cut Pro X only exports 24-bit audio and you can’t change that setting. To prove this as I was researching this article, I imported a 16-bit audio clip and when I exported it, FCP X increased it to 24-bit.

Definition: Audio Bit Depth. In digital audio using pulse-code modulation (PCM), bit depth is the number of bits of information in each sample, and it directly corresponds to the resolution of each sample. (Wikipedia)

Bit depth does not affect frequency response. Both mono and stereo files can be 16-bit; or any other bit-depth for that matter. As I tell my students, bit-depth determines the dynamic range of a digital audio file.

Definition: Dynamic range is the distance, measured in dB, between the softest and loudest passages in an audio clip. Larger bit-depth numbers yield greater dynamic range.

Bit-depth comes in four basic varieties: 8-bit, 16-bit, 24-bit and 32-bit. 8-bit yields the smallest files, but the least dynamic range; this tends to make the audio sound consistently loud. While some compression codecs are 8-bit, most audio today is 16-bit. This is the bit-depth for CD, DVD, and most video cameras. It allows a dynamic range of about 120 dB. 24-bit and higher allow greater dynamic range, which is especially helpful when mixing complex projects.

This is not to say that 16-bit audio is bad. In fact, most of us can’t hear the difference between different bit-depths, even when using good speakers. But, just like video, if you spend time creating good quality sound, using higher-bit depths allows you to retain quality throughout the post-production process.

Many applications today are smart enough to automatically switch between different bit-depths. However, as Bob indicated, some devices are hardwired to expect a certain audio format.

Definition: Linear PCM. This is essentially uncompressed audio. It is the highest quality audio format and ideal for recording, editing and mixing. However, like many uncompressed video files, this audio format is often compressed prior to distribution to reduce file size. PCM stands for “pulse code modulation.”

Keep in mind that all things being equal, higher bit-depths provide higher quality. Don’t convert to a lower bit depth until all your editing and mixing is complete.

WOW! This was difficult!

This audio conversion should easily be able to be done in Apple Compressor – but every time I attempted to change audio bit-rate, the compression job failed. This occurred whether I used AIF, WAVE, or ProRes 422. I’m not sure why. I reset the entire application and all preferences, yet the compression job continued to fail.

When I use Adobe Media Encoder, the process worked perfectly – except:

To test bit-depth conversion in Adobe Media Encoder, I created a custom QuickTime file with ProRes, because I didn’t have the Cineform drivers on my system. So that you can test this for yourself, I’m including steps for both AME and Compressor in case you are able to get Compressor to work for your files.

I should also mention that if you are dealing with audio-only clips, this bit rate conversion can easily be done in any audio-editing software like Avid ProTools, Adobe Audition or most other audio utilities without resorting to your video editing software.

Here’s an audio-only file opened in QuickTime Player X. Notice that it is a 24-bit file. This was the 16-bit master file I exported from FCP X. (You’ll see both “big-endian” and “little-endian” formats. Here’s an article that explains them.) 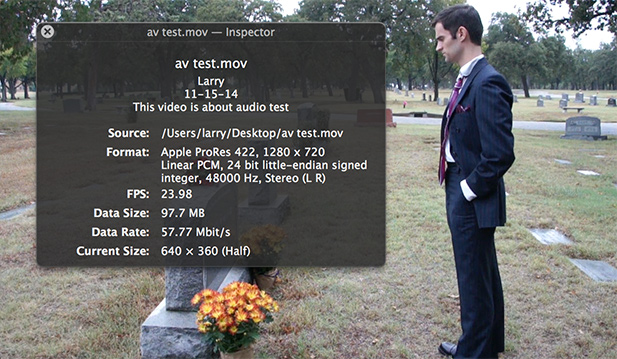 Here’s the video file opened in QuickTime Player X. Again, note that the audio is 24-bit. 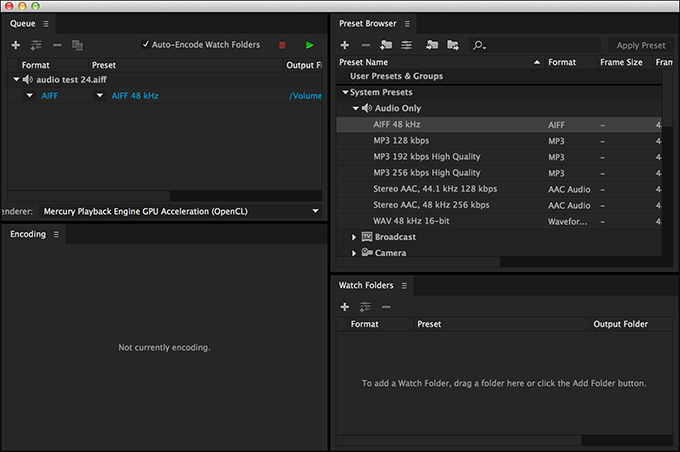 Open Adobe Media Encoder and import the audio file you want to convert. 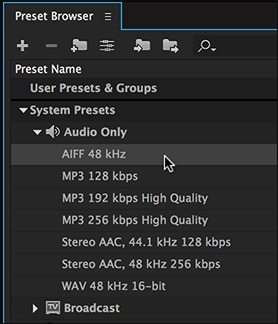 From the Preset Browser drag System Presets > AIF 48 kHz on top of whatever default compression setting is applied to the clip. 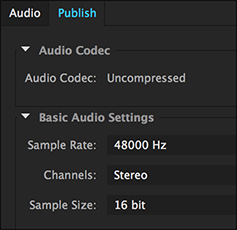 If you click the blue AIFF 48 kHz setting, and look in the Audio tab, you’ll see that the default Sample Size (bit depth) is 16-bit.

Click the green Start Queue button to convert the audio.

Here’s what the specs of the converted audio file look like.

However, converting a video file is a LOT trickier. Since Adobe Media Encoder does not include ProRes presets, you can either create your own QuickTime preset using ProRes, or use the GoPro Cineform or AVC-Intra codecs.

However, the Cineform codec is not installed when you install AME and the AVC-Intra format created by AME can not be imported by Final Cut Pro X, though it can be imported by Adobe Premiere Pro CC 2014.

For this example, I decided to create a custom QuickTime preset using ProRes 422. (Though to be truthful, I first tried the GoPro codec, then AVC-Intra. Only after both of those didn’t work did I create a custom setting.) 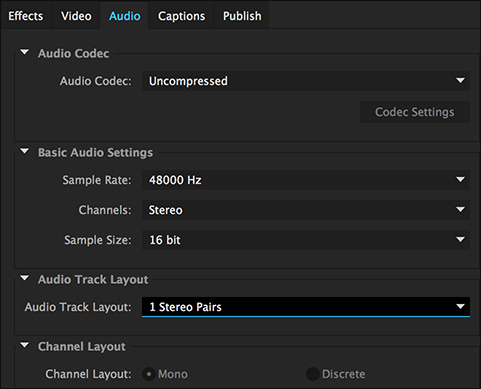 Here is the audio section of my custom compression setting. As you can see, the default Sample Size (bit-depth) is 16-bit.

Drag the setting on top of the clip you imported. Then, click the Start Queue arrow to convert your audio. 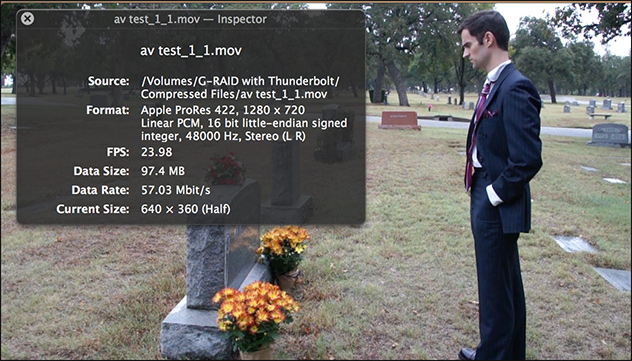 Here’s how to convert files using Apple Compressor 4.1; keep in mind that I as soon as I clicked Start Batch, the compression job failed. Your results may vary. 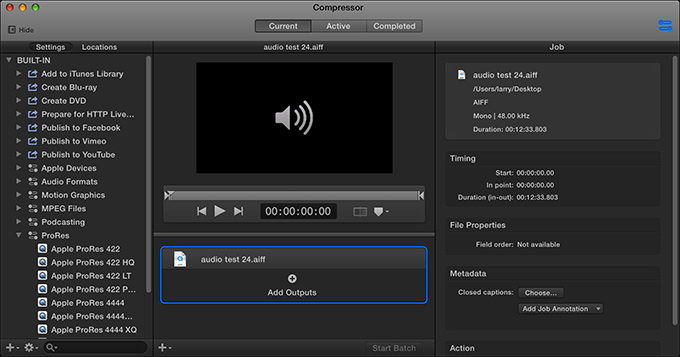 Open Compressor and import the audio clip you want to convert. 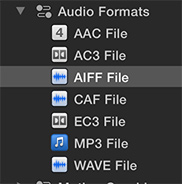 Display the Settings tab on the left and open Audio Formats. Select either AIFF or WAVE – both work the same way and both are considered uncompressed audio. I use both formats in my work. 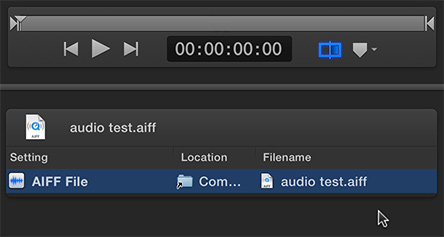 Drag the AIFF (or WAVE) setting on top of the audio clip. 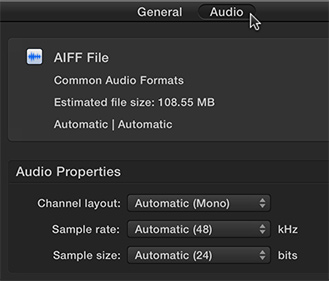 Open the Inspector, on the right, and click the Audio tab.

Change the Sample size from Automatic to 16-bit. Leave the rest of the settings set to Automatic.

Click the Start Batch button and your new file should be converted to 16-bit audio.

The process is similar with video files, except we need to use a different codec. 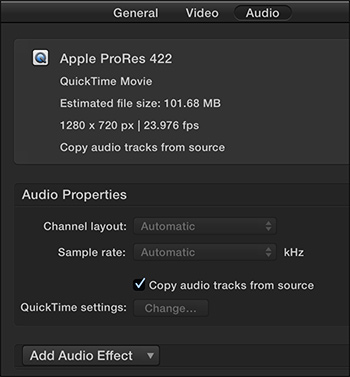 Open Compressor and import the file containing the audio you want to convert. From the Settings menu apply the ProRes > ProRes 422 setting (or any other ProRes setting you prefer).

Select the preset you just applied to the clip, then, open the Inspector and select the Audio tab. 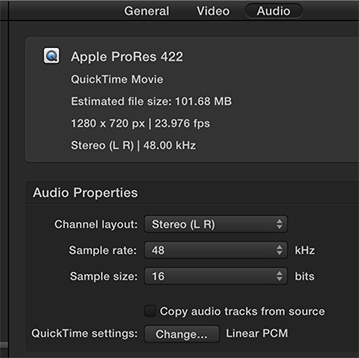 Then, change the Sample Size to 16-bit.

Leave all other settings unchanged and click the Start Batch button at the bottom of Compressor.

Whoa! This was way more work than I expected! First, Compressor should handle this task, but it doesn’t.

Second, Adobe Media Encoder makes the process much more difficult by not including GoPro drivers or ProRes presets.

On the other hand, converting audio bit rate can be done; once you know how.