Adobe released the latest updates to Adobe Media Encoder (AME) last week – November, 2015. So, I wanted to compare the speed of the latest version of AME to earlier versions and Apple Compressor.

Fortunately, I had the same test files, presets and hardware that I used for my last two compression speed tests, so I was able to create results that are directly comparable to prior tests.

This article is part of series looking at video compression:

When compressing on an iMac in single-pass mode the latest version of Adobe Media Encoder is marginally faster than earlier versions, showing a 6% improvement in compression speed across our suite of four movies.

When compressing on a MacBook Pro, the new version was 6% slower than the earlier version, again, in single-pass mode.

Multi-pass compression speeds slowed down significantly for the laptop and marginally for the iMac.

However, the latest version of Adobe Media Encoder is slightly more than twice as slow as Apple Compressor because, while AME efficiently uses the GPU during compression, the GPU is no match for the hardware compression utilized by Apple Compressor.

Clips. I tested clips using three different codecs: XDCAM EX, ProRes 422HQ and ProRes 4444. Two clips had native 720p images. The other two clips were scaled to 1280 x 720 during compression. Clip durations ranged from 4 minutes to 48 minutes. All test clips were the same for all tests and all hardware.

Compression settings. AME defaults to 1-pass VBR with a 16 mbps bit rate. I tested both 1-pass and 2-pass VBR, with the bit rate standardized to 10 mbps for all applications. I used the default YouTube 720p compression setting and only modified the bit rates to match at 10 mbps. Max and Min settings in AME were identical at 10.

NOTE: The lower the bit rate, the longer a file will take to compress.

Compression times were reported by the application. No other apps were running during compression. Only one setting was applied to each clip. Clips compressed individually, no two clips compressed at the same time. 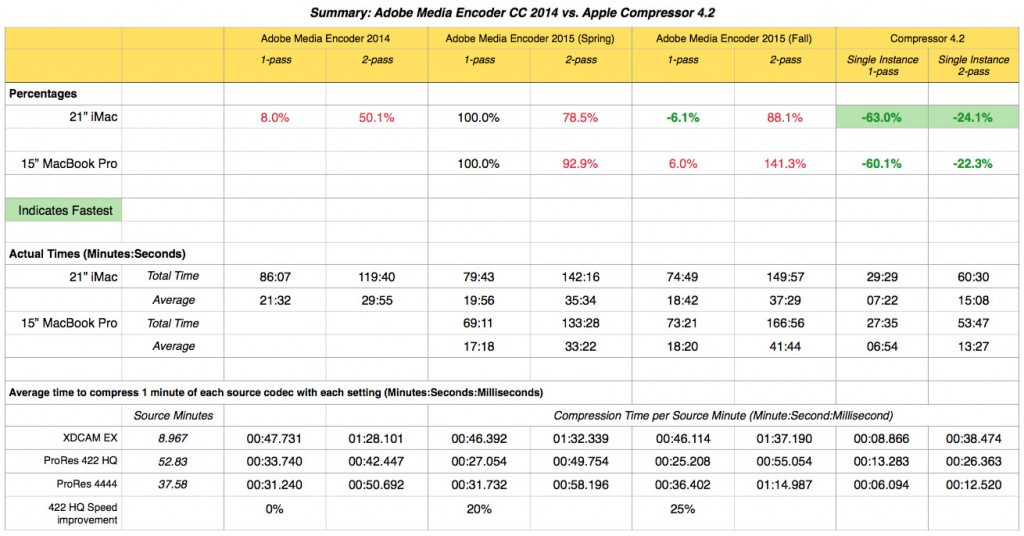 (Click to see a larger, more readable version of this table.)

I compiled a table showing all my results. (Click here to download a four page PDF with all timings and details.)

In compiling this table:

Also, as illustrated on pages 3 and 4, I was surprised that file sizes consistently increased when I switched from single-pass to multi-pass compression, even as the bit rate remained the same.

This contradicts my long-held belief that one of the biggest advantages of multi-pass mode was higher image quality and smaller file sizes. At high bitrates, image quality should be virtually identical between the two modes.

The new version of Adobe Media Encoder has some very attractive new features. I’m especially impressed with Adobe adding both the Video Limiter and Loudness Normalization into AME. Plus, the new support for H.265 means I have a whole new range of compression tests to play with.

NOTE: Here’s a short video showcasing some of the new features in the latest version of Adobe Media Encoder.

But, when it comes to speed, the new version is essentially the same as the old version.