Caution: Storage Speeds Can Vary Dramatically and Cause Problems

As I was writing an article on compression speed using the 4.3.1 version of Apple Compressor, I needed to transfer some files from one hard disk to another. More specifically from a single, spinning media hard disk to an external SSD connected via USB3.

Things started out well – then they got weird. Then, they got REALLY weird.

All storage devices have maximum speeds which can vary based on a number of factors:

It has long been reported that the Finder is not particularly efficient at copying files between drives, though moving files within the same hard disk is almost instantaneous. 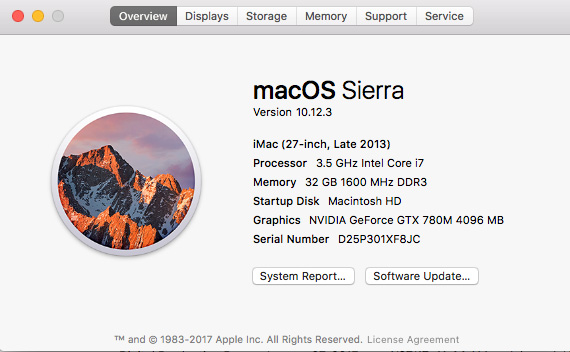 The computer doing the transferring was an iMac running OS X 10.12.3. 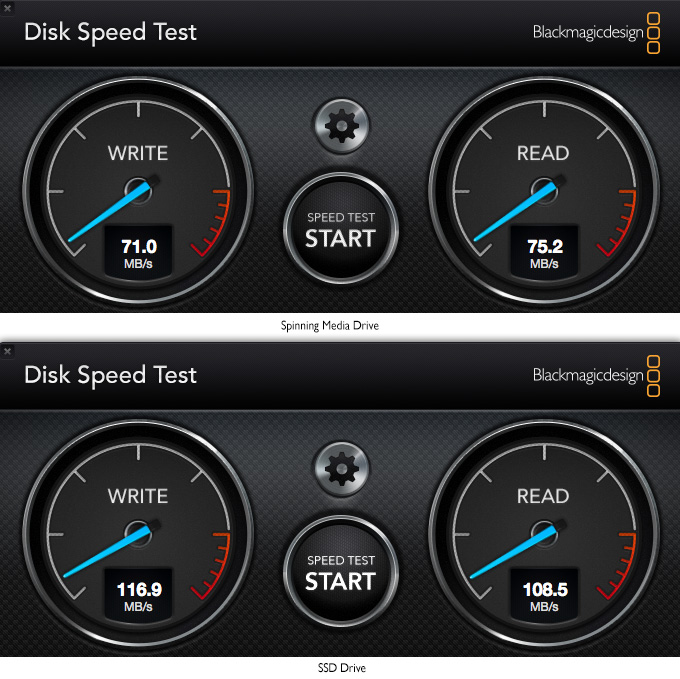 The spinning media drive transferred data around 75 MB/sec, while the SSD transfered data around 115 MB/sec; as measured by the Blackmagic Disk Speed Test.

NOTE: The specific brands of drives are not the issue, directly, so just stay with me a for a bit.

I was transferring 143 GB of files, the smallest of which was 2.5 GB. Due to the way the Finder works, small files transfer more slowly than large files. These are really big files, so they should transfer faster than “normal.”

Um, I don’t know, really, but here’s what happened in the first two minutes. The spinning media drive (in blue) started playing back data at 45 MB/sec, while the SSD started recording it at 150 MB/sec.

NOTE: The key numbers are Data read/sec (playback) and Data written/sec (recording). Both are measured using Activity Monitor, which is stored in your Utilities folder, under the Disk tab.

This transfer shouldn’t be asymmetrical – you can only record data at the speed it is played back. The SSD was recording data three times faster than it was playing back. There are always measurement issues when a transfer first starts, but this lasted almost two minutes.

Then, pulsing started. The fastest sections (the fat ones) pushed data at close to 120 MB/sec, while the slower sections dragged at 17 MB/sec. Notice also that the “saw-tooth edge” of the spinning media drive indicates significant speed variations, while the SSD drive records at a more steady pace.

Then, things just got insulting – speeds slowed to 8 MB/sec. This data rate is far too slow to support even SD video!

NOTE: I consider 75 MB/sec the minimum speed necessary to support reasonable HD video editing. Faster is, obviously, better; but steady and constant speeds are essential, too.

During the transfer, Time Machine was turned off and all other applications were quit. Nothing should have interfered with this transfer running as fast as possible.

I’ve known for a long time that spinning media drive speeds will vary slightly when transferring data, depending upon how long it takes the heads to find the right spot on the disk. But, I’ve never measured anything like this.

Worse, if you were editing and this happened, you’d be dropping frames left and right, and never think that the hard disks you were using were slowing down so severely. Still, I’m not sure where the problem is:

One thing I noticed was that when I transferred a large file from the internal Fusion drive to the SSD, I got consistent speeds with much less fluctuation. So, this may point the finger toward the spinning media drive being the cause of the problem.

I don’t have a solution, but I do have some recommendations:

There are two free utilities that are excellent for testing hard disk speeds:

In all cases, when dropped frames or slow data transfers start occurring, ignorance is not bliss. And, as always, let me know what you think.

6 Responses to Caution: Storage Speeds Can Vary Dramatically and Cause Problems