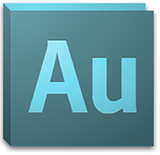 In my experience, there are two statements known to cause riots: the first is categorically state what’s the best non-linear editor, and, second, is to discuss setting audio levels.

Since things are a bit quiet at the moment, let’s boldly sally forth into a discussion of audio levels.

NOTE: I am always happy to learn from readers and correct my mistakes. Feel free to share your comments below. However, name-calling is not allowed.

With the demise of Soundtrack Pro, I am very impressed with the new version of Adobe Audition CS6. I have always loved working with audio, and this program has a lot of nice features that I appreciate a great deal. So, this article shows how to use an effects filter in Adobe Audition CS6 to set levels dynamically.

For this tutorial, let us assume we have a variety of on-location recordings where we want to retain background and environmental sound. However, like most productions, the talent was recorded low so as to guarantee that there would be no distortion.

We want to increase the audio gain of the talent, without destroying the background sound.

There are several ways we can do this:

However, in all of these examples, there is no guarantee that we won’t adjust the audio level too much and cause distortion. Also, it is either impossible or very difficult to respond to moment-by-moment changes in audio.

What we want to do is increase the softer passages while making sure the louder passages don’t distort.

NOTE: Audition also provides filters that allow you to remove background noise. (Here’s a webinar that explains how these noise filters work.) However the reason we went on location in the first place was to record the sound of the environment along with our talent.

Audition allows audio filters to be applied either to the clip or the track. A typical use of a clip filter (which Audition calls “effects.”) might be to remove hum from one clip, without applying that effect to all the other clips in that track.

However, in almost all cases, audio effects are applied to the track.

I first wrote about the Limiter filter when covering Soundtrack Pro. (Read that article here.) A similar filter exists in Audition – called the Hard Limiter effect – that should absolutely be part of your regular audio toolkit.

What the Hard Limiter effect does is amplify soft passages more than louder passages and guarantee that the loudest passages of a clip or track stay below the “limit” that you set in the effect. In other words, the Limiter effect makes the overall volume of a clip louder while “guaranteeing” that the audio in that track won’t distort.

Because Audition has its roots in radio broadcast, several of its filters are designed to improve the levels of audio recorded in a studio. While these filters work, they totally destroy any background sound that’s contained in a clip recorded on location.

These two filters are: 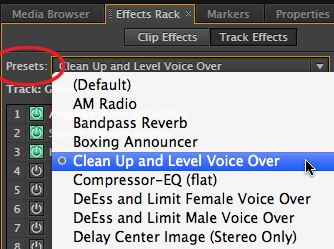 The problem is that these two filters are often part of the gain presets shipped with Audition. For this reason, I strongly recommend against using any presets to fix audio levels where the background sound is important to the mix.

Presets to avoid include:

These filters are excellent for studio recordings with no noise, but not to be used for mixing location audio.

A NOTE ON LEVELS IN AUDITION

Because the system displays peaks, rather than average (or RMS) volume, I set my audio levels set using peak values. Many pro audio engineers prefer to work using average levels, which Audition can calculate, but not display.

NOTE: The most important rule for audio is that your audio levels for the entire mix must not, ever, exceed 0 dB during mixdown, export, or when saving the file. It is not unusual for levels to exceed 0 dB during the mix as you are determining your levels, but excessive levels must be adjusted below 0 dB prior to final output.

When measuring audio levels, always assume the meters are correct and your ears are wrong.

WHERE DO YOU PUT THE LIMITER EFFECT?

On small projects, say less than 10 tracks, you can apply the Limiter effect directly to the track.

However, for larger projects, to conserve CPU cycles, the Limiter effect is often applied to a sub-mix, where all the dialog tracks, for example, are routed to the sub-mix for audio leveling before final output in the mix.

Also, as a general rule, the Limiter filter should not be applied to sound effects, natural background sound, or music. This effect is designed for narration, voice-overs, interview subjects, and all on-camera speech.

HOW DOES IT WORK? 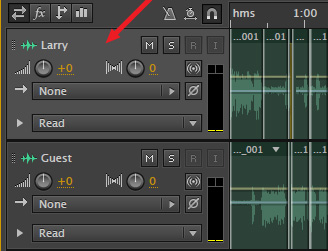 Select the track to which you want to apply the filter; this could be a track, submix, or master track. In this example, I’ve selected the track named “Larry;” note the lighter gray color indicating selection. 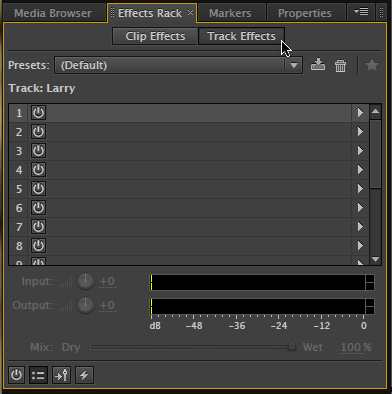 Click the Effects Rack tab – or select it from Window > Effects Rack – shortcut: Option+0) – to make it active.

From either the Effects menu at the top of the screen, or the right-pointing white arrows to the right of the Effects Rack, select Amplitude and Compression > Hard Limiter. 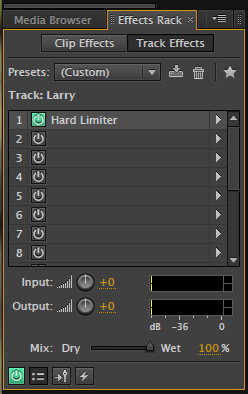 Two things happen: the Hard Limiter is listed in the Effects Rack and… 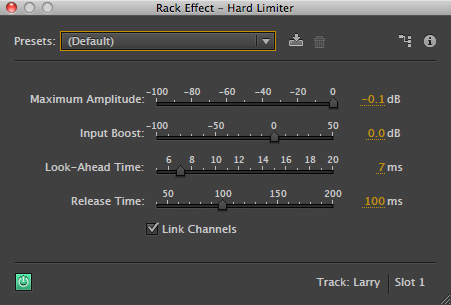 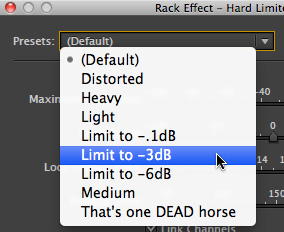 The specific settings you use can vary, but one that I like is to use Limit to -3dB. 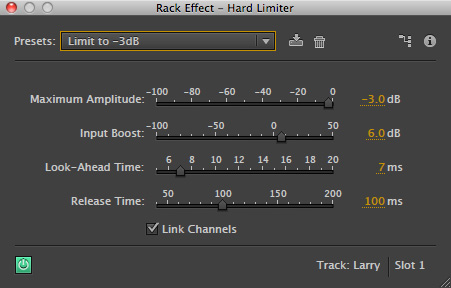 What this does is amplify (Input Boost) the audio gain for the entire clip by 6.0 dB, provided that the maximum level (Maximum Amplitude) never exceeds -3.0 dB.

The only setting you need to adjust is Input Boost. Your goal is to amplify the clip so that it sounds louder, without sounding distorted. The easiest way to adjust this is play your clip and drag the Input Boost slider to adjust the gain. For setting input gain, I like the interface of the Limiter filter in Soundtrack Pro MUCH better as it provided a visual indicator of when the filter was properly adjusted.

So here’s an easy way to set this using Audition. 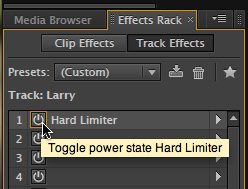 Click the green power button in the Effects Rack so it goes gray, this turns the filter off without deleting it. 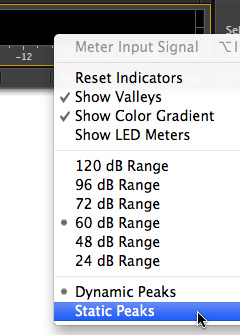 Right-click in the audio meters and set peaks to Static Peaks.   This shows you the loudest your peaks are without resetting the peak indicator every few seconds.

Play a representative portion of your clip and watch where the static peaks max out. Since this is a peak, most of your levels will be softer than this. Enter this number into the Input boost.

For example, in this screen shot, my maximum peak is -7 dB. So, I would enter 7 dB into the Input Boost. This gets the effect close to the level I need. At which point, I play the sequence and tweak slightly until my levels sound good. The Maximum Amplitude setting limits the total volume so that it does not get louder than -3 dB.

THE LAW OF THE PAN

So, the process is the same, but the levels of your clip won’t exceed -6 dB. Weird but true.

If you are looking to level out the audio gain of a track, without running the risk of distortion, the Hard Limiter is a great choice. The reason I prefer the Hard Limiter effect versus a compressor, is that the Limiter is easier to set up, and provides better control over limiting the maximum volume of a clip.

NOTE:  Recently, I created an entire series of video training covering Adobe Audition. This tutorial is an excerpt from that training.