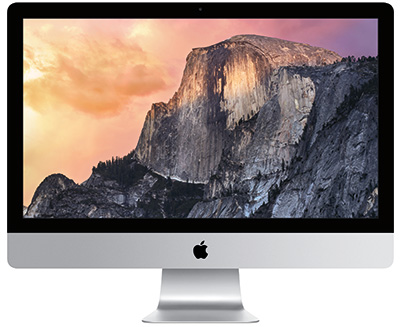 Here’s the highlights of the new unit:

A recent blog post on iFixIt indicates that, aside from the display, the new iMac uses the same components as existing 27″ iMacs. (Read it here.)

This is the iMac page on Apple’s website: http://www.apple.com/imac/

NOTE: The starting price is $2,499, which provides a very nice system. Configured for maximum productivity, the price is a still-reasonable $3,599.

THINGS TO THINK ABOUT 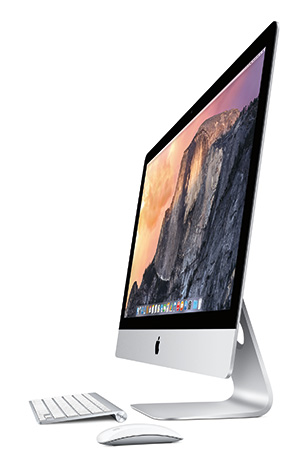 From an engineering point of view, this is an amazing monitor at a very attractive price; especially when I can remember HD video monitors costing upwards of $20,000.

There are two cautions to this system, though, that you need to consider:

According to Apple’s press release: “Every iMac with Retina 5K display is calibrated using three state-of-the-art spectro-radiometers to ensure precise and accurate color.”

What I don’t know as I write this is which color space these calibrators are using and whether we can trust the colors on the screen for critical video work. For web video and, most likely, photography, I’m sure this monitor represents most colors well. However, for more critical video work, I need to learn more about how this is calibrated.

Remember that new-and-improved Timing Controller mentioned above? This puppy needs to pump out a LOT of data to feed full-frame, high-frame-rate video to 14.7 million pixels. In fact, it requires so much bandwidth that the current DisplayPort 1.2 standard can’t support it. This is why there’s no separate 5K display – we don’t have any connection on the Mac that’s fast enough to get the data from the computer to the monitor. As fast as Thunderbolt 2 is, it is too slow to support monitors this big.

I expect that to change with upcoming standards such as DisplayPort 1.3 and Thunderbolt 3. However, for now, 5K is limited to just this system. 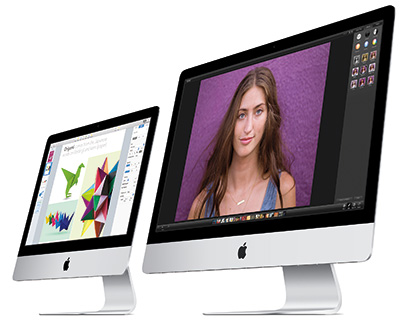 A NOTE ON TEXT

It is a fact of physics that if monitor size remains the same while pixel density (resolution) increases, then the size of each pixel must get smaller. As pixels get smaller, the text displayed by the application should also get smaller.

But, here, Apple is doing something clever.  On the new iMac with 5K Retina display, if you run the system at “Best for Retina” resolution in System Preferences > Display, the physical size of onscreen objects (for example, text and buttons) is the same as the non-Retina 27″ display. This is because Apple has created an invisible “grid” that overlays the on-screen pixels, not just for this computer, but as part of their overall OS development system.

Developers create their user interface using coordinates on this grid. This means that text sizes don’t change, even though pixel density does. This keeps interface elements looking consistent, while the increased pixel density of the 5K iMac makes everything look sharper and higher resolution.

If you don’t need the extra pixels, stay with the existing 27″ iMac. The only reason to step up to this system is for the extra screen resolution.

The entry system is very nice for people that need more pixels but don’t need to move them around very quickly. Still photographers come first to mind.

As your budget allows, I would recommend the following options, listed in priority with the highest on top:

Personally, I like the 1 TB Fusion drive a lot because it does a nice job of balancing performance and storage space with cost; so I don’t generally recommend upgrading to other options. I have it installed on two of my new iMacs and find its performance excellent. Its integral SSD drive gives me speed for repetitive tasks and the 1 TB hard drive means that I have internal storage as well.

NOTE: A Fusion drive combines both SSD and standard spinning media into a single unit. The SSD is 128 GB in size and is programmed to store the portions of the OS, applications and data that you use the most. This accelerates your most common tasks, while still providing lots of extra internal storage if you need it.

Keep in mind that for all media work, I ALWAYS recommend storing projects and media on a second drive – ideally, a RAID 5 system, if your budget permits. I only use the internal drive for the operating system, applications and temporary files.

Excluding the cost of RAM, which varies by vendor, the new configured price of the iMac is $2999.00, excluding AppleCare and tax. This is still an amazing price.

I really like the current crop of iMacs and, from what I read, the 5K iMac fits very well into that family. However, my strong recommendation is to see one of these in person at an Apple Store, run the applications on it that you commonly use, and see how it looks.

Whether this is a good system for you depends upon what you are doing:

It is always nice to have choices.