Apple Compressor is a good choice for those situations where you need to scale high-definition (HD) video down to standard-definition (SD).

NOTE: Here’s an article that explains how to do this using Adobe Media Encoder.

However, the settings are not intuitive, so let me explain how they work. And, at the end, I’ll also have thoughts on optimizing image quality.

NOTE: Changing the size of an image always changes the image quality. When scaling smaller images larger, they get soft and a bit blurry. When scaling larger images smaller, they lose resolution. This is caused by the limited number of pixels in a video image. We can try to minimize the damage, but nothing we do will make it go away.

One other thought. I’m using the H.264 codec in this examples. For the web, that’s a perfectly fine choice. For video going to broadcast, probably not. However, the process of resizing video is the same, regardless of which codec you use for the final output. 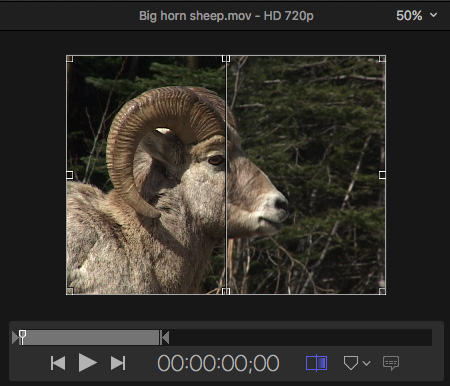 Most SD images have an almost-square 4:3 aspect ratio, as illustrated here in Compressor.

The Aspect Ratio describes the proportions between the width and the height. There are two principle ratios: 4:3 and 16:9. Because video changes size based on the size of the monitor displaying it, it is easier for us to describe video using aspect ratio and total pixels than inches.

There are two image sizes for SD video:

Both these formats use rectangular-shaped pixels, rather than the square pixels we are used to on our computers and the web. (Converting these rectangular pixels to square pixel values leads to all sorts of different numbers for SD video.)

For the purposes of resizing from SD to HD, the actual number and shape of the pixels is not important; though they are very important when resizing from HD to SD. 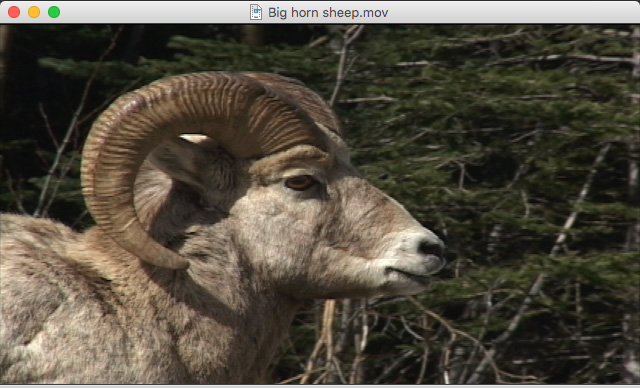 If, when we resize, we simply stretch the pixels to fill the new frame, we end up with very fat video. Even sheep are offended when stretched this severely. If you do this to people, they will stop talking to you.

We need to find a better way.

However, the process of converting is the same.

After importing your image into Apple Compressor, drag one of the Video Sharing Services presets onto your video. These presets are good for YouTube, Facebook, Vimeo, and other social media websites.

These default presets are also a good start for creating your own, custom, preset.

Select the preset that’s attached to the clip, then, click the Video tab in the Inspector.

NOTE: If you don’t see the Inspector, open it by choosing Window > Show Inspector (Shortcut: Cmd + 4). 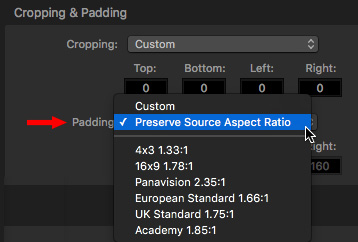 Scroll down to the Cropping & Padding section and set Padding to Preserve Source Aspect Ratio. Make sure all Cropping values are set to 0. 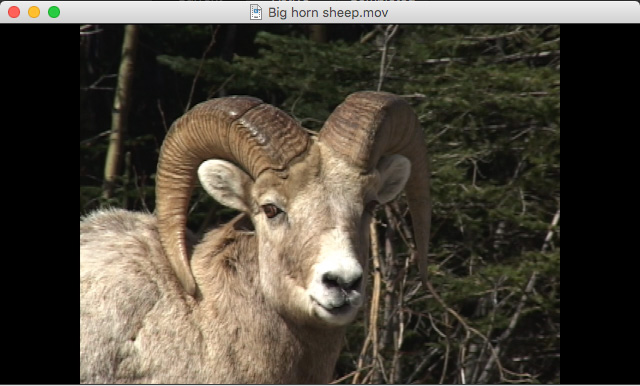 These settings will automatically center your image, then add black pillar bars on both sides of the image. This preserves the original image, yet converts it to the standard 16:9 aspect ratio of HD video. 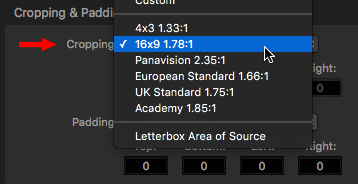 If you don’t want the black bars, your ONLY option is to remove pixels at the top and bottom of the image. Stretching is not an option because it distorts the image. 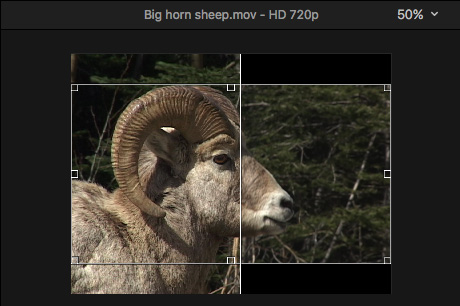 Notice that now, Compressor displays your image such that it fills the frame, by removing pixels at the top and the bottom. 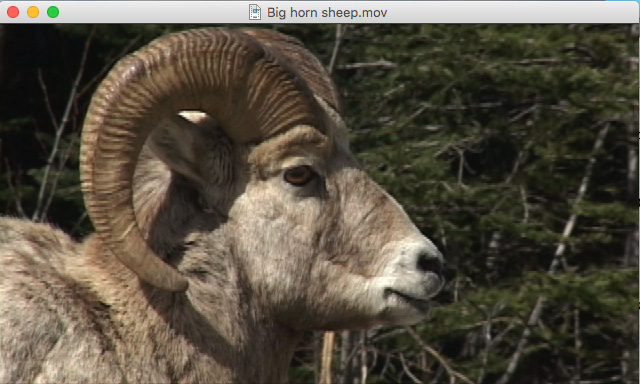 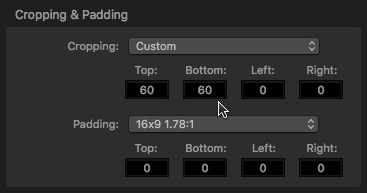 By default, cropping uses the center of the frame. You can manually adjust which portion of the image to display by using the numbers in the Cropping dialog. The 60 and 60 indicate the number of pixels being cropped off the top and bottom of the frame.

As long as you don’t change the sum of these two numbers, i.e. 120, you can alter each of these numbers to move the cropping frame up or down. For example, set Cropping to Custom, then change the values to move the selection box up or down – say, 30 and 90, or 75 and 45.

Left and Right should always remain at 0.

Complicating resizing to SD is that there is no single SD format, there are actually three major categories:

Each of these three has the same aspect ratio, but different pixel counts and pixel aspect ratios: 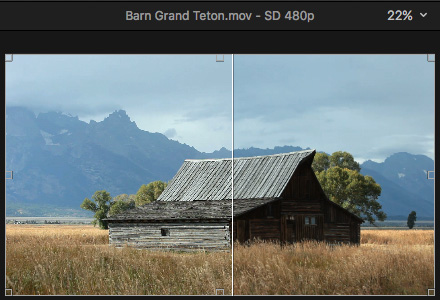 I can’t think of a single reason to scale an HD image to SD simply to post on the web. But, if you do, use the Video Sharing Services > SD 480p preset.

The defaults are fine, don’t change any of the Cropping or Padding settings.

To scale HD to 16:9 NTSC SD, apply the same SD 480p preset, then in the Video Properties tab, manually change:

As before, don’t change any of the Cropping or Padding Settings.

NOTE: DVDs use a 720 x 480 frame size. Broadcast and cable most often use 720 x 486. Be sure to check with your distributor to determine what frame size they want.

To scale HD to 16:9 PAL SD, apply the same SD 480p preset, then in the Video Properties tab, manually change:

As before, don’t change any of the Cropping or Padding Settings.

When scaling a 16:9 image to 4:3, you will need to set the Video Properties based upon which of the three SD formats you want to create; just as we did above.

Once those are set, you now have two more resizing options: 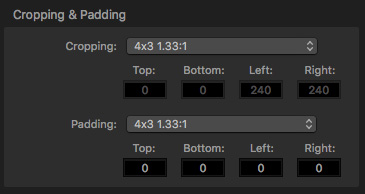 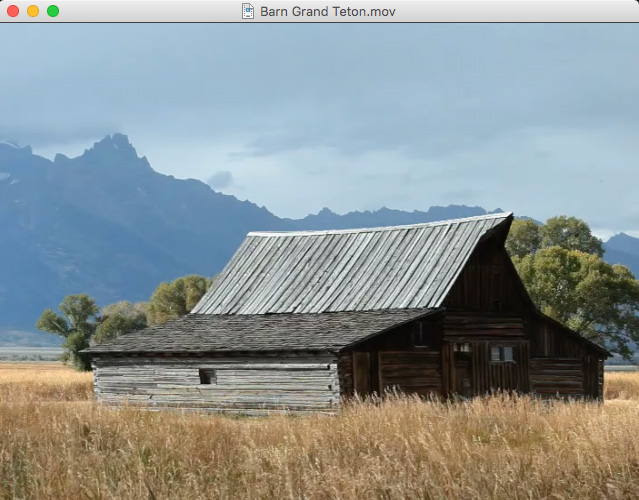 This creates a nicely cropped 4:3 SD image, losing image data from the left and right sides. 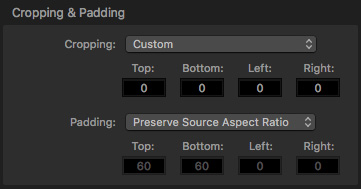 If, on the other hand, you want to preserve the entire image, and include letter-boxing, set Padding to Preserve Source Aspect Ratio and make sure all Cropping numbers are set to 0. 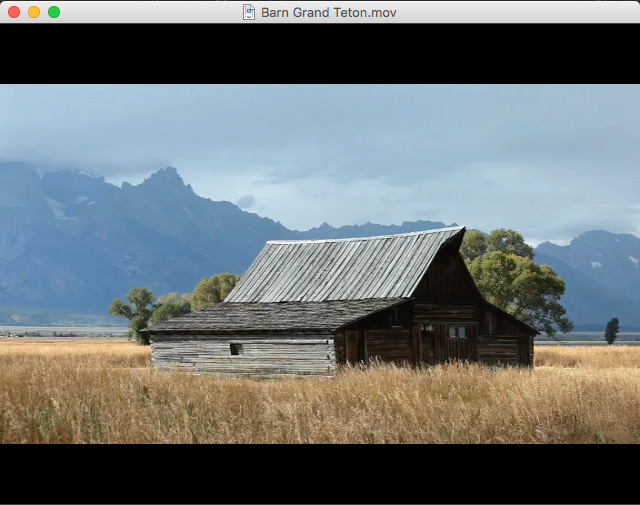 Again, this creates a lovely letter-boxed image. Compare this to the image above to see what was lost on the edges.

Most of the time, the default image quality settings will be fine when rescaling an image. However, you can tweak these, if you like. They are contained in the Quality section of the Video tab. 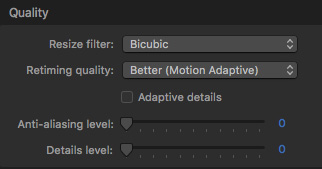 If you want to experiment, change the Resize filter to Bicubic.

Adaptive Details and Anti-aliasing are only relevant when creating interlaced video. Progressive is a better deliverable because it is far easier to create interlaced video from a progressive master than the other way round.

I would leave both the Anti-aliasing level and Details level set to 0.

This process seems complex, simply because of the number of different video formats we need to deal with. Once you know what you want to create, the rest of the steps are straight-forward.