Adobe Updates All Their Media Applications

This morning at 9:00 AM (Los Angeles time), Adobe updated and released updates for:

I’ve had the opportunity to work with these new versions for the last couple of weeks, in preparation for two live webinars today, so here are my reactions.

Adobe has three “themes” for this update:

As with past updates, Adobe continues to focus on Premiere as the hub of their media applications. That trend continues with more features, or more controls, from other applications migrating into Premiere.

I don’t necessarily disagree with this idea, however, Adobe needs to be really, really careful that Premiere not fill up with so many features as to be unusable. So far, with this release, they’ve struck a really nice balance between adding features without making the interface overly complex or chaotic. 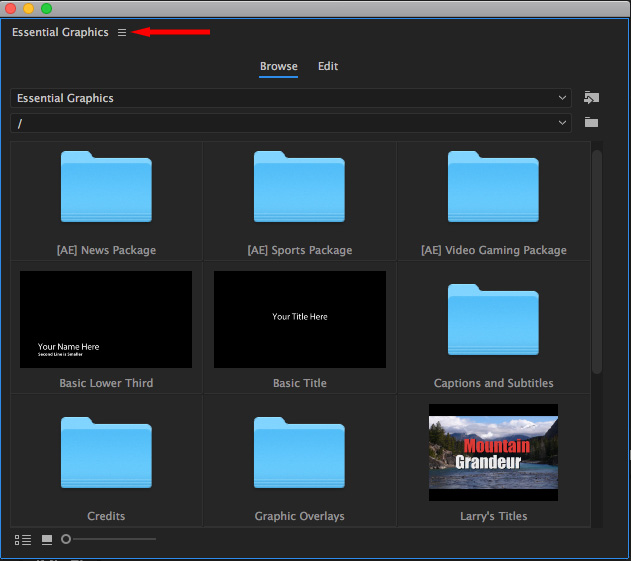 The Essential Graphics panel appears in both Premiere and After Effects. In both cases, it provides control of brand-new Motion Graphics templates, allowing editors with no significant amount of graphics ability to change the text or look of graphics created by professional designers.

Adobe ships several graphics sets with the new version: News, Sports, Video Games, Credits, Lower Thirds, Credits and more. So, even if you don’t have access to the resources of a graphics designer, you can still quickly get started with these new templates; and every template can be modified within Premiere.

NOTE: I applaud Adobe for finally including media and templates with Premiere. This is one area of editor support where Apple has been way ahead.

Live Text templates have gone away, replaced by the much more capable Motion Graphics templates. Simple templates can be created in Premiere, but more more complex versions are created in After Effects.

Motion Graphics templates can contain anything that After Effects can create – video, audio, text, animation – and, even better, you can flag specific parameters to travel with the template so that the Premiere editor can change the text, or colors, or position… or, just about anything.

NOTE: Another new feature is that we can now create titles in Premiere by simply selecting the text tool and typing on the Program Monitor. No more working in the Title window unless you want to! 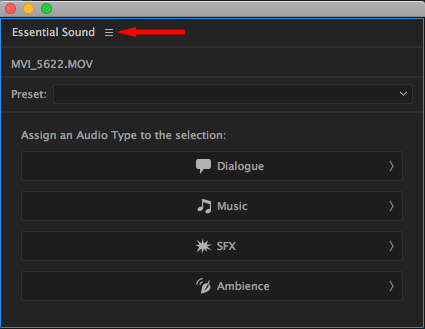 The Essential Sound panel (ESP), which first appeared in Audition, now migrates into Premiere. This allows you to select one or more clips, then adjust them for loudness, clarity or volume, as well as repair audio problems – all without leaving Premiere.

For those that used the Essential Sound panel in Audition, it is exactly the same in Premiere.

What the ESP is doing, behind the scenes, is applying existing Audition audio filters and effects – which provide outstanding quality and audio processing – to your clips. Its as though you were working with an audio pro, without needing to know anything about audio. All settings are non-destructive and can be changed at any time. And, when you send a project from Premiere to Audition for a final mix, all the ESP settings travel with it, so the audio editor doesn’t need to do the same work twice.

Thinking of Audition, Adobe has enhanced the interchange between the two applications. When you send a Premiere project to Audition now, ESP settings, audio volume keyframes, audio filters and filter settings all travel with it. An added benefit is that you no longer need to render your video files before Audition can play them.

This “settings portability” is a major plus for using Premiere/Audition for your audio mix.

On export from Premiere, we can now automatically publish clips or projects directly to Adobe Stock. This provides a one-click opportunity to make money on our images.

“Contributing to Adobe Stock gives users the opportunity to earn royalties and gain added exposure for their creative work. When a submission is accepted, contributors can track sales in real time via the Adobe Stock dashboard,” Adobe wrote in their release notes.

It is now one-click easy to convert a standard Premiere project into one accessible for Adobe Teams. Team projects allow multiple editors in the same office, or scattered offices, to share project and sequence files.. For those who have heard of Adobe Anywhere, Teams are much less resource intensive because media is stored locally with each editor while the database that defines the project and sequences is hosted on Adobe’s servers.

Team projects support full collaboration between editors, including version control within a project and conflict resolution between projects. And, this release provides dynamic links between After Effects and Premiere which means comps can transfer without rendering. (Converting a standard Premiere project to a Team project is as easy as selecting a single menu choice. Converting back is equally easy.)

There are lots of other changes in this release:

WHAT’S NEW IN AFTER EFFECTS

The key bullet points are: 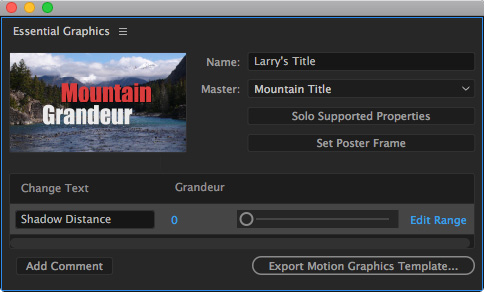 The Essential Graphics panel in After Effects provides more functions when creating templates, including the ability to specify which settings are controllable from within Premiere.

NOTE: Once a template is created, it can no longer be modified in either Premiere or After Effects. So, be sure to keep a copy of the original comp in AE in case you need to make changes to the template design in the future. 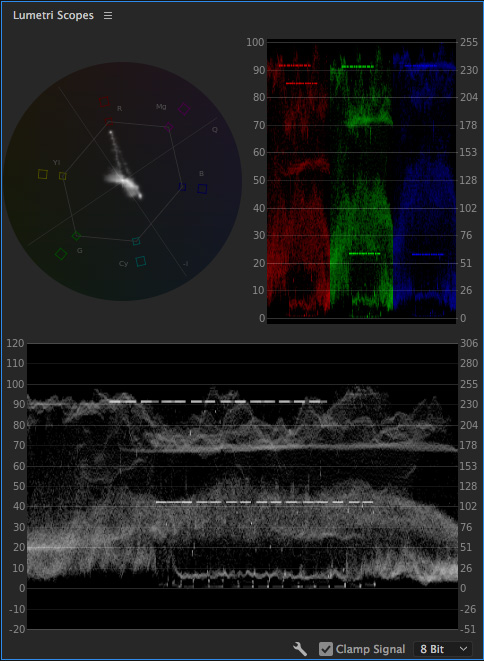 Another big feature is that the Lumetri video scopes, which first showed up in SpeedGrade, then migrated to Premiere, continue their peripatetic travels and now appear in After Effects as well.

As someone who constantly relies on video scopes, this is a big benefit.

The Camera Shake Deblur, when combined with the Warp Stabilizer, salvages otherwise unusable shots due to camera bumps or undesirable motion blur that can remain when using stabilization tools. The new effect reduces motion blur by analyzing frames on either side of the selected frame to identify apparent sharpness and then uses optical flow technology to apply the sharp frames onto the blurred frames.

After Effects has supported dynamic links between comps and Premiere for a while now. What’s new is that it provides this same time-saving utility for Team projects as well.

Regarding GPU acceleration, Adobe writes: “New to the GPU-accelerated effect list are Fractal Noise, Levels, and Fast Box Blur, giving you the classic look of Gaussian Blur (Legacy) and Fast Blur on the GPU. Also, get overall performance improvements under the hood.”

The big news is that Audition integrates even more seamlessly with Premiere. Settings in the Essential Sound Panel, effects parameters, volume keyframes all travel with a project that’s sent from Premiere to Audition for mixing. After using this for a week, this has already saved me time on every project and I’ve had no problems using it.

Premiere continues to gain effects parity with Audition. Premiere’s audio effects are OK, Audition’s are far, far better. This migration of effects from Audition to Premiere promises only good things for the future. Ultimately, I suspect that both Premiere and Audition will share the same audio engine, which would be great for both applications.

For me, Audition is still better for complex mixes, sound design, audio repair, and the overall quality of its audio tools. Still, with each update, Premiere continues to get better. 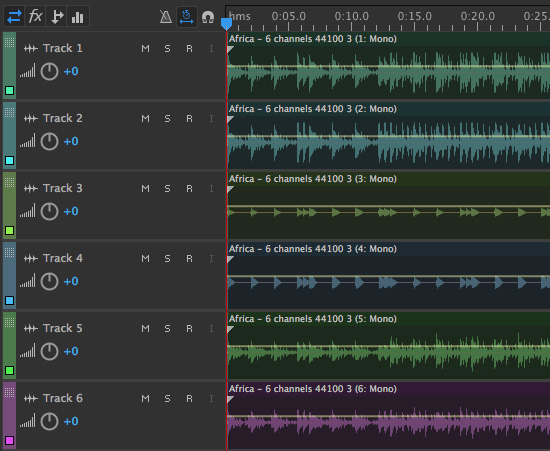 A single keystroke now splits multichannel clips into their own track in the multitrack Timeline. As someone who regularly records four-channel interviews, the first time I did this I started giggling. It is VERY fast! 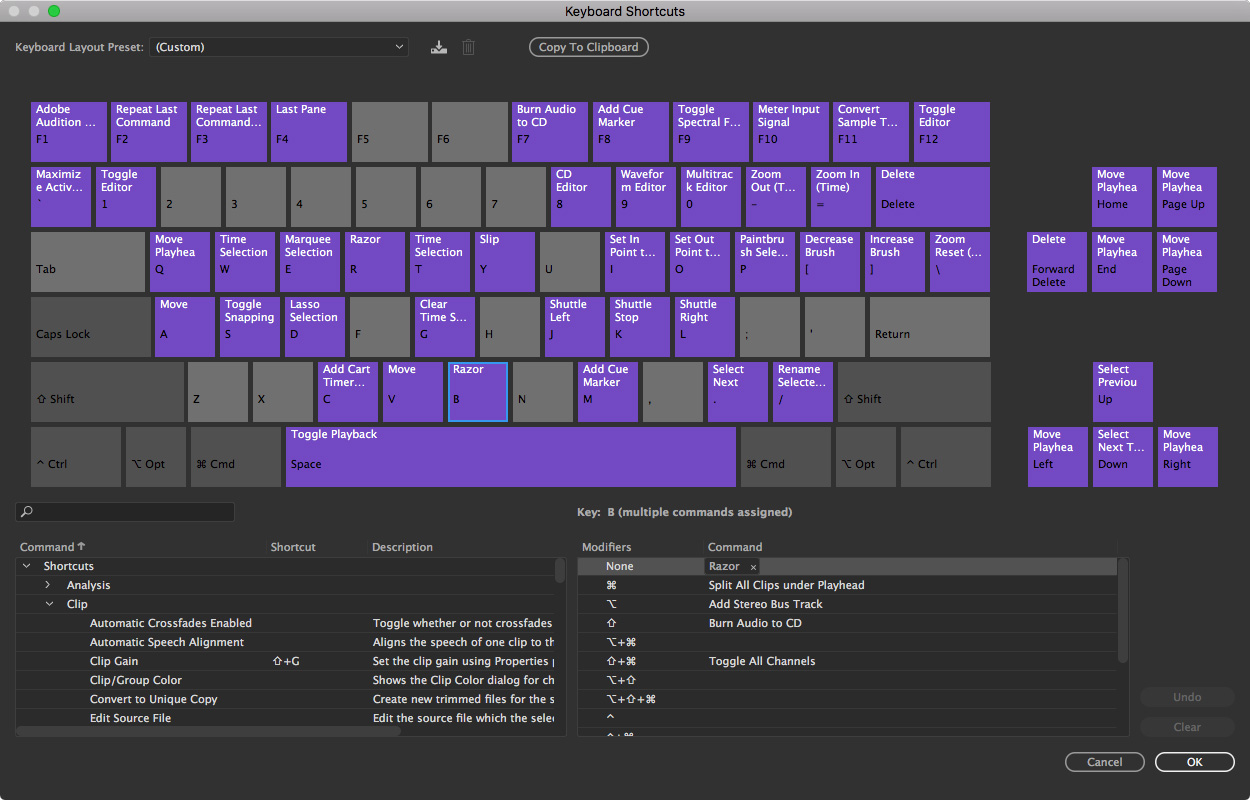 Keyboard shortcuts can now be created visually. I’ve always liked the fact that I can assign multiple keys to the same shortcut. That hasn’t changed. What’s new is how easy it is to find shortcuts that are already assigned to keys or available keys to assign a new shortcut using the visual layout of a keyboard. 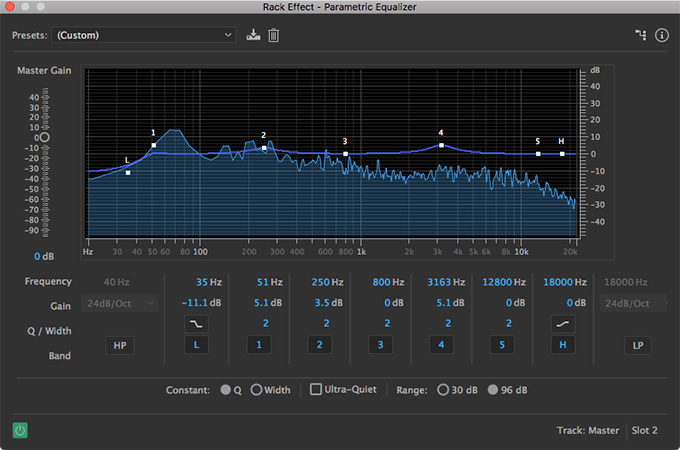 Another feature that I really like is the real-time display of audio waveforms (and frequencies) in key audio filters like the Parametric EQ and Dynamic Processing. While not all filters, in fact, most of them, don’t have this feature, it is really handy for those that do.

NOTE: It would be great to have this kind of visual reinforcement included when using the Hard Limiter effect. (Hint, Hint…)

AME continues to tie itself more tightly into Premiere and AE. It can now encode projects and comps without requiring that they be exported first.

It will compress in the background while Premiere is editing in the foreground without choking.

It browses both individual and team projects in the Media Browser.

Character Animator is not a program that I know or use, so I don’t have any comments here, except to say that, while the program is still in beta, Adobe is very excited about it and where they are going with it.

Amidst all the excitement of these new tools, standard upgrade rules apply:

In general, it won’t hurt to wait a week or two to see what, if any, problems surface before committing your projects and yourself to the latest version. I haven’t seen any big problems, yet, but I’ve been using it to learn, not putting it under a full production load.

With this release, Adobe continues to improve their editing tools by providing access to the power of After Effects, Audition and Media Encoder within the familiar interface of Premiere.

I’m also impressed by Adobe’s continued effort to improve the ability of teams to collaborate, working together on the same project. And they continue to refine and simplify tools that used to be extremely complex so that video editors can more easily use them.

Best of all, every one of these applications is available for download right now – free – via the Creative Cloud app. You can learn more about all these updates at Adobe’s website.

As always, let me know your thoughts.

8 Responses to Adobe Updates All Their Media Applications