This is the sixth year our podcast – Digital Production Buzz – is covering the NAB Show in Las Vegas in April.

This is the second of two articles on how the Digital Production Buzz is covering the 2014 NAB Show. This is also our sixth year as an Official Media Partner with NAB and this year we are bringing our biggest team ever: 29 people! You can find us in Booth SL 11505. In this article, I want to explain the staffing and workflow that runs in tandem with the gear.

NOTE: Click here to read the first article on the gear we are using at the show.

While our team started talking about the 2014 NAB Show in December, 2013, actual planning didn’t really begin until January this year. Our Event Producer, Debbie Price, looked over all our notes from last year’s coverage and began assembling a list of companies and individuals we wanted to invite for this year’s shows.

The Digital Production Buzz focuses on companies, people and products of interest to the independent producer/director/editor. Companies invited to the show need to have products that are of value to independent producers and with price points that make them affordable. During NAB, we only have slots for about 80 interviews, so the show is quite selective about who it invites from more than 1,600 exhibitors.

During January, we narrowed the list of potential guests to invite to about 90 and Debbie started work contacting companies and PR agencies and setting up the interview agenda.

At this same time, we made the decision to create two separate shows: NAB Updates, which airs live twice a day, and NAB Special Reports, which posts every evening around 7 PM.

So, when we did the math, we realized that we needed to conduct about 80 interviews over the course of 3 1/2 days at NAB; roughly an interview every 20 minutes. Interviews start at 9 AM and wrap by 5 PM; all are recorded in our booth on the show floor. While I’m interviewing, the rest of our team is editing or streaming the material that has already been created.

By the end of March, Debbie had the entire interview schedule filled. The last week before the show is filled with negotiations between Debbie and me trying to cram in “just one more…”

Since I took over the Buzz almost six years ago now, no one has ever paid to be on the show. This is an important point for me – we control the guest list, all content and all interviews. I develop all the questions myself. We’ve only been challenged once about our editing and I made the decision to remove the interview from the show because I didn’t want to make the edits that the guest was requiring.

That being said, I’m not omniscient. At the end of every interview, I always ask: “Is there a question I should have asked that I didn’t?” Most guests say “no,” and those that do frequently suggest a subject I had never considered. I’m always happy to learn new things and add it to the interview.

We are also happy to take suggestions for people to interview. 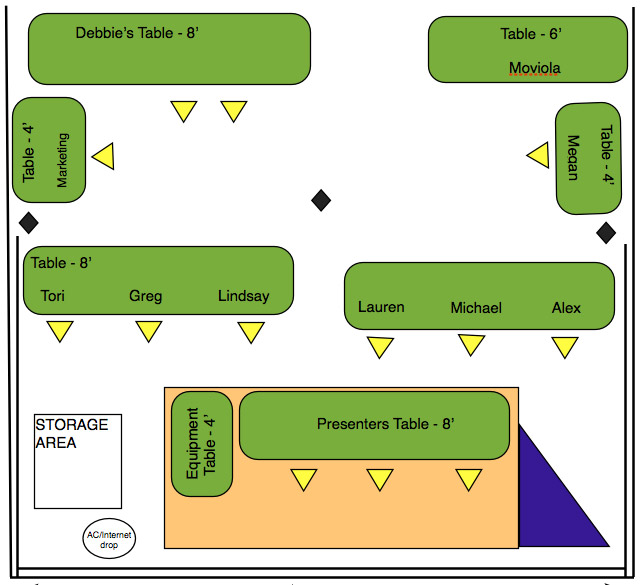 To help you visualize our system, here’s the floor plan of our booth.

The process starts with our producer, Debbie, who sits at the front table with a schedule of all guests and interviews. Tyler acts as runner/production assistant who tracks down guests that forgot their interview.

NOTE: One of the big benefits to doing these interviews for several years is that guests now anticipate their interviews. Almost everyone turns up without needing to be tracked down. This makes our life MUCH easier and we are grateful.

When the guest arrives, Debbie verifies that the information we have on file for them is accurate and chats with them until it is time for their interview. While they are waiting, the current interview is played over the PA system in the booth.

When its time for the interview, Debbie escorts them to the stage, where I say hello and get everyone on headsets and settled. Most, but not all, guests are accompanied by a PR representative. We have a pair of headphones on the stage so the PR person can listen to the interview.

All audio is recorded using Adobe Audition CC, an audio package we first used at last year’s NAB. Given all the audio work that we do each week, I could not get my work done without Audition. It is excellent!

After the interview is complete, I say good-by to the guests and store the source files, which Audition places in a folder, in the 01 Ready to Edit folder. I then notify Lindsay, who handles all of our traffic. The interview now enters post-production. 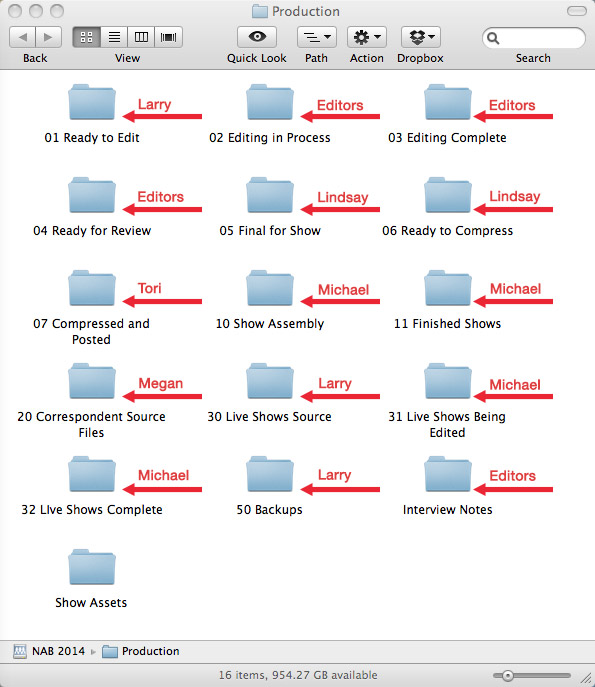 There are lots of high-tech solutions to project management and file tracking. But we are doing live shows on an extremely tight deadline with a facility that is built the day before and torn down on the last day of the event; in a venue that has very limited access to the Internet.

We decided to go with paper tracking sheets and a simple system of moving files from one folder to the next. When deadlines are short and pressure is high, there is a HUGE value in simplicity. (Also Internet bandwidth is so constrained at the show, we need to have a system that doesn’t rely on the web.)

The screen shot above is how we have the folders on our file server arranged so that as a file moves through the editorial process, it gets moved from one master folder to the next. This makes it very easy for Lindsay to spot the status of any interview simply by checking which folder it is in.

All audio is edited and reviewed using Adobe Audition CC.

Lindsay then assigns the interview to one of our four editors (one of whom is doing double-duty as videographer) and hands them the tracking sheet. Our goal is to get an interview posted within 60 minutes of the end of the interview.

One of our editors – Michael, Lauren, Megan or Alex – cleans up the recording, verifies levels, exports two versions of the file and writes a short description of the interview contents.

Then, its back to Lindsay or Greg for quality control to make sure nothing bad crept in during the edit.

Lindsay then brings the finished files to Tori who’s our webmaster. Tori compresses the file using Apple Compressor and posts it to the web. Interviews are posted to the NABShowBuzz.com and DigitalProductionBuzz.com websites.

My goal is to post at least three interviews an hour starting about mid-day Monday. I’m curious to see how well we hit this goal. With luck, our system will be fast enough that everyone is waiting on me. THAT would be a first!

MEANWHILE, BACK AT THE RANCH

While those interviews are going on, Debbie is also prepping for two live shows each day. We call these our NAB Updates. These air live at 10:30 AM and 2:00 PM. Here, all the guests are assembled on stage before the start of the show.

Fifteen minutes before the show starts, we stream music to our DigitalProductionBuzz channel so that listeners can tune in from around the world. Once the music starts, the show is underway, because all music, open/close and commercials are contained in a single QuickTime movie that we play from an iPad. This “Show Bed” determines all the timings in the show.

My role, then, is to watch the clock and ask questions of guests so that each segment ends on time; well, that and ask questions that generate interesting answers. Using a Show Bed simplifies my timing and mixing because all the show elements that are not a live guest are pre-built into this single playback movie.

NOTE: I’ve also added a countdown clock to the Show Bed so it times me down to the end of an interview. When you hear me ask: “So, where can we go on the web to learn more about your company?” that’s code for: “You have 30 seconds left, wrap it up.”

When the live show is complete, the four track recording – Larry, Guest 1, Guest 2 and Room Tone – is turned over to Michael. Michael handles much of our editing back at the office. For example, while I was recording our recent Final Cut Pro X training, Michael was in the other room editing it.

Michael cleans up any errors or audio problems with the recording and outputs the complete show to post to the web. He then makes a second pass and exports each interview as a stand-alone file to post individually to the web.

All these files are then reviewed by Lindsay and turned over to Tori for compression and posting.

When all files are edited, exported, compressed and posted, Lindsay brings the tracking sheets over to Patrick who handles social media posting during NAB. Patrick posts announcements about the release of our latest interviews to Twitter, Facebook and Linked-In, plus an emailed note to each guest with a link to their interview so they can listen to it and/or post it to their website. From time to time, Tori will also be posting photos to Instagram.

Finally, all the tracking sheets end up on Debbie’s desk, where she enters them into our FileMaker database which we use to track all guests and shows for the Buzz throughout the year.

Whew! Thursday afternoon we strike the booth. And Thursday night I take a looong nap.

You can hear the results of all this work for yourself starting at 10:30 AM Monday, April 7, when we air our first live show. Then, for the next three and a half days, we are recording 80 interviews and creating eleven and a half hours of programming which you can hear on the following websites:

For a small company like ours, putting something like this together is a massive effort. I especially want to thank our producer, Debbie Price, and our sponsors who make it all possible:

Listen to all our coverage at www.NABShowBuzz.com.

2 Responses to Buzz At The 2014 NAB Show: Workflow